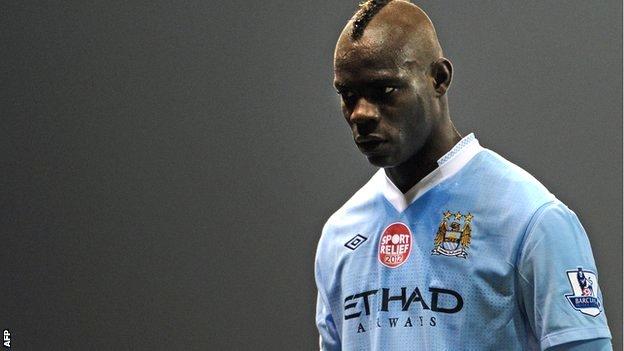 Mario Balotelli says he has "no intention of leaving" Manchester City this summer.

Manager Roberto Mancini admitted he could be ready to sell the controversial Italian striker after his sending-off against Arsenal.

Mancini has since backtracked but warned Balotelli he must change his ways if he is to remain at the club.

"My future? I'm under contract at City and I have no intention of changing shirt," the 21-year-old striker said.

I have the fortune to be working with [Roberto] Mancini, one of the best managers in the world, if not the best

While City have no intention of actively pursuing a sale of the player, BBC Sport understands the club would be prepared to listen to serious offers for Balotelli this summer.

The Italy international has been linked with a return to his homeland, with both Inter and AC Milan known to be monitoring the striker.

However, Balotelli believes his experience in England is helping him to mature. He has scored 17 goals in 31 club appearances this season, but has been sent off twice.

"I am only thinking about winning the title at the moment," he told La Gazzetta dello Sport. "Why do you always talk of Inter and Milan for me?"

"I don't have nostalgia for Italy. The Premier League is an experience that is serving me very well. When I was at Inter Milan I called my mother to solve every little problem. Now I have to go it alone. "

Mancini's relationship with Balotelli has been a source of tension this season.

The City manager joked that he would have punched his striker every day if they were team-mates, but Balotelli insists he is lucky to work with his compatriot, who signed him from Inter Milan for £24m in August 2010.

"I still have to improve, especially as a footballer," he told the newspaper. "Above all my behaviour on the pitch, but also tactically. I have the fortune to be working with Mancini, one of the best managers in the world, if not the best.

"Things are going well between us. After my red card against Arsenal he feared a long ban so he spoke about me with such harsh words.

"But we have explained things to each other. I know that he believes in me."

Carlos Tevez has also made headlines for the wrong reasons this season, but Balotelli says the Argentina striker has become a role model for him.

"But from him I have learnt to always give everything, every day. Carlitos is very special and as such we can say that he is very similar to Ibra [AC Milan's Zlatan Ibrahimovic]."