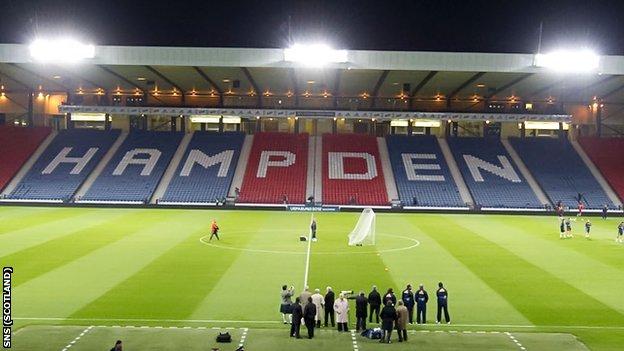 The governing body may act as frustration grows over the failure to agree new league structures.

The SPL has delayed a decision on proposed voting reform until 30 April, with the 10 non Old Firm clubs seeking change.

Should no agreement be reached then a new league is a possibility.

The prospect of a new Scottish National League was confirmed to BBC Scotland by three senior football figures.

An SFA source said: "There would have to be a willingness from clubs; this would be for the good of the game.

"It would almost be a benevolent act to bring two warring factions together for the good of Scottish football."

A senior SPL club official added: "The SFA may step in and get involved. The extreme may be that they take the thing over.

"Everyone has to move this along, it's whites of the eyes time."

He said that he believed the vote to change to a 9-3 voting structure from the current 11-1 on major issues would still be taken at the 30 April meeting, but warned that the governing body might have to step in take control of the situation.

"The clubs have to start making decisions, I think the vote will go ahead," he continued. "Certain teams are desperate to move the game on. There has been too much navel gazing going on.

"We need to get to the stage where decisions are getting made."

The source warned that the 10 clubs seeking change were determined to continue their fight.

"We will still be there," he said. "The clubs won't go away without a fight. We need a debate on this on 30 April. These are very interesting times for the future of the game. Much more fairness and balance is needed."

Meanwhile, a senior SFL source confirmed that the idea had been discussed.

"This could come about if the people running the SPL and the SFL don't get their act together," he said.

"There are clubs almost dying all round the country while nothing happens."

The SFL source added that First Division clubs had been briefed that, after unacceptable SPL proposals to create an SPL 2, the option of a new league set-up could be on the table.

"An invitation could be sent to all 42 clubs," he said. "If two or three don't want to come and join the new set up then that is up them."