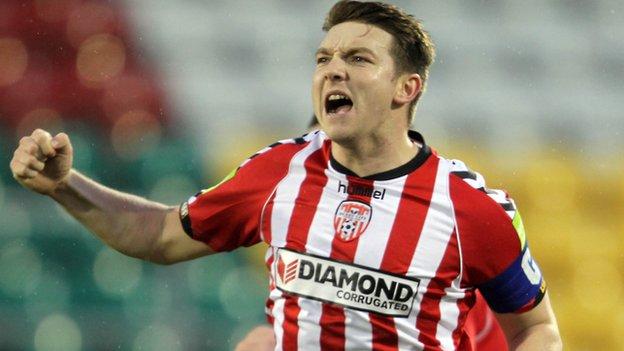 Derry have one foot in the Setanta Cup decider after defeating 10-man Rovers in the semi-final first leg.

Keeper Reyaad Pieterse was sent-off for a foul on David McDaid, who saw his effort from the resulting penalty saved but Kevin Deery followed up to net.

The 15th minute goal gave Derry the edge and Patrick McEleney doubled the lead with a superb 20-yard strike.

Rovers rarely threatened and Ryan McBride headed in the third from McEleney's cross after 85 minutes.

The game turned on Pieterse's early dismissal with the keeper, who was making his home debut, halting McDaid's clear run on goal.

His replacement Oskar Jannson kept out the spot-kick but the ball fell kindly to Deery and the City captain rifled home the rebound.

The hosts had the wind at their backs in the first half but Derry posed the greater threat with the extra man.

Stephen McLaughlin's low drive was pushed round the post by Jannson a minute before the break.

Jannson tipped another McLaughlin effort over but the keeper could not keep out McEleney's poweful shot on 51 minutes.

The holders enjoyed plenty of possession in the second half but failed to create openings and Derry completed a memorable win when McBride headed down and past Jannson from eight yards.

The sides meet again at the Brandywell next Monday in the second leg with Derry firm favourites to progress to the final.