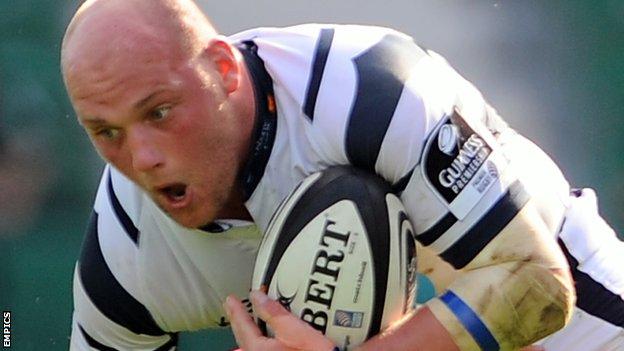 Bristol's Jason Hobson has been handed a one-week suspension by the Rugby Football Union.

Prop Hobson pleaded guilty to stamping on an opposition player in their 19-19 play-off draw with Nottingham on Friday, 30 March.

The club had already handed the player an internal seven-day ban and he will now miss Saturday's final play-off game with Doncaster.

The front rower played an integral part in Bristol's narrow 26-20 victory over London Welsh on Sunday, which secured a place in the play-off semi-finals.

Head coach Liam Middleton told BBC Radio Bristol: "Whatever happens in the hearing, we can't deal with. It's a formality and we'll just see how it goes.

"Hobo was outstanding [against Welsh] but so was all of our pack. There's been a little bit of criticism for them in previous weeks but I thought they had a very good day."

Middleton hinted that he might reshuffle his squad for the visit of Doncaster in order to rest key players for the semi-finals.

"I'll look at our injury status during the week and see how we are physically," he added. "There's a couple of squad guys who have been sat on the bench who I think can breath some real energy into the game."