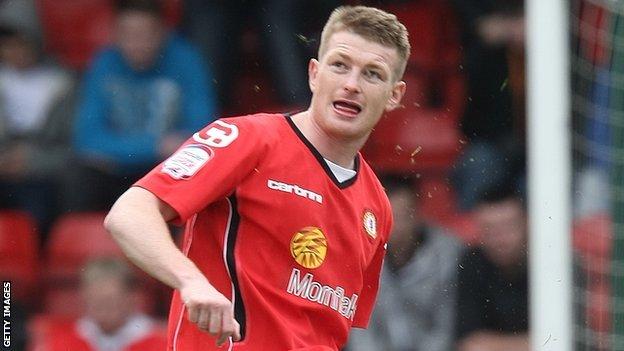 The Alex are in eighth place on goal difference with just three games remaining, but Dugdale says his team-mates are relishing the challenge.

"Everyone's excited by it, they're loving it, everyone's buzzing," he told BBC Radio Stoke.

"They're all massive games. Everybody's looking forward to it. We want to be involved until the end of May."

He added: "As a professional footballer you want to be involved in this at the end of the season, you don't want to be sitting in mid-table playing for nothing."

Crowds have picked up at home and away with Crewe on a 13-match unbeaten run, and Dugdale has said that breeds extra confidence.

"It gives you that boost, it makes a difference. At home games you can see the Main Stand getting involved and that's brilliant because if you know they are behind you it gives you another 10% and pushes you on."

And he insists the club's blend of youth and experience is vital ahead of important games with Cheltenham, Torquay and Aldershot.

"The young lads are playing with less fear and Steve [Davis, manager] and Dave [Artell, captain] have been there and done it before so they can guide everybody through, so it's a good mix."

Meanwhile, on-loan striker Billy Bodin, who could yet play a part in three separate promotions after appearances for parent club Swindon and while on loan at Torquay, is confident the Alex can go all the way.

"The stage we are at this season, we're almost there. There's only three games left, I think the lads have got to keep their nerve and keep playing the way we have been.

"I don't think we will lose our nerve or lose our concentration because I think the lads are focused on what we need to do. I think we'll be alright."