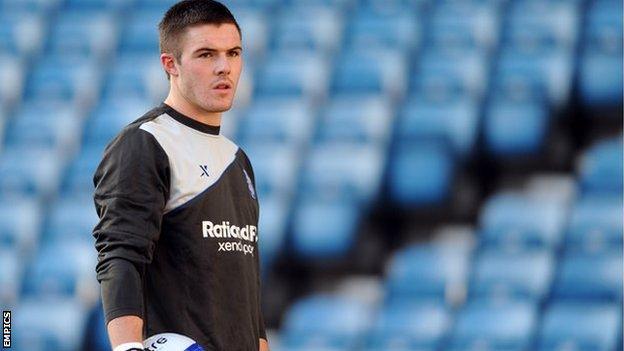 Birmingham City have recalled goalkeeper Jack Butland from his loan spell with League Two side Cheltenham.

Blues manager Chris Hughton took action after first-choice keeper Boaz Myhill injured his thumb in the warm-up before the 2-2 draw with Bristol City.

"I would like to thank Jack for his effort and Chris for his help."

"Hopefully Jack will go on to be the top player we all know he can be and we wish him all the best," Yates added.

Birmingham City manager Chris Hughton sympathised with the Robins, but stated that his own squad has to take priority.

"We need him to cover, he's done a super job at Cheltenham.

"They're pushing for the play-offs as well so it's a difficult time for them but our priority is to make sure we've got enough cover. We feel he's going to be a very very good goalkeeper."

Butland, 19, conceded 26 goals in 24 appearances as the Robins pushed for a play-off place.