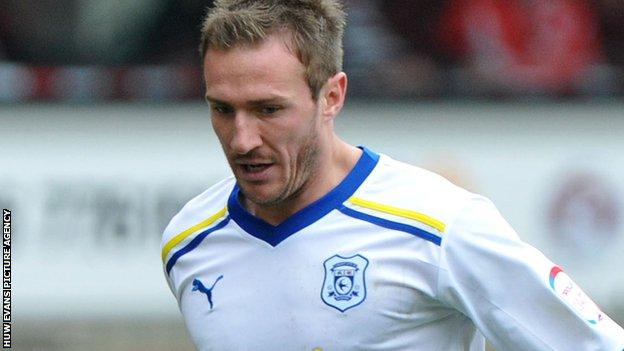 Manager Malky Mackay has said Liam Lawrence's experience will be vital in Cardiff City's bid for promotion to the Premier League.

Lawrence, on loan from Portsmouth, scored his first goal for Cardiff in the 1-0 win at Barnsley.

The victory saw Cardiff consolidate their position in the Championship play-off places with three games remaining.

"He's been a fantastic professional since he came here," said Mackay.

"He's not got an ego and he's integrated well with a group of people here who have really worked hard for each other.

"Experience wins Championships and it's something that is not cheap. Experienced players cost a lot of money and at times we've lacked experience.

"We've got a lot of youngsters here but we've got energy and togetherness."

Lawrence has won 15 caps for the Republic of Ireland and Mackay believes he should be considered by Giovanni Trapattoni for this summer's Euro 2012.

"I don't see why he shouldn't try and force himself in there again," added Mackay.

"He's someone who keeps himself immaculate, he's a good professional [and] he's a good age and he's been at a good level. Why not?"

Victory at Oakwell saw Cardiff stretch their unbeaten run to seven games and moves them two points off seventh-placed Middlesbrough with three games to go.

Two of Cardiff's remaining three games are at home, beginning with Tuesday's match against Derby County and Mackay says the Bluebirds' fate is in their own hands.

"Every week you can say the ball's in your own court," said Mackay.

"You've got to go out there and make sure you try and compete, do the best you can and apply yourself well and hopefully that's enough.

"That doesn't change between the first game of the season and the last.

"We've just got to concentrate on the 90 minutes in front of us at Derby and after that we've obviously got two games left."