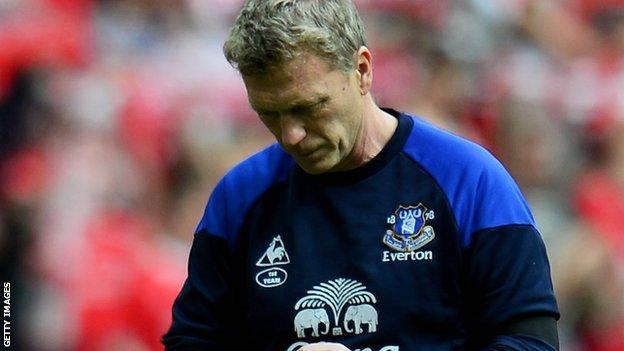 Despondent Everton manager David Moyes admitted his side missed the perfect opportunity to reach the FA Cup final after they lost to Liverpool.

The Reds came from behind to win 2-1 at Wembley with goals from Luis Suarez and Andy Carroll after Nikica Jelavic put Everton ahead.

"It was a great opportunity for us to give ourselves a chance to play in another Wembley final," said Moyes.

"With the way we've been playing it was our chance but it wasn't to be."

Moyes felt the key moment was Suarez's equaliser just after the hour, when the striker collected an intended backpass from Everton defender Sylvain Distin to beat keeper Tim Howard.

The Toffees boss waited to console Distin as he left the field and said: "He's really down. He's an experienced player who has been here before and won the FA Cup with Portsmouth, so he knows what it means and how important it is.

"Sylvain has been great for us but he made a mistake that gave Liverpool impetus. I actually thought we had weathered what they had thrown at us in the first 20 minutes of the second half.

"There were only small margins between the sides. It was a mistake that changed the game. We were so desperate to get to the final for the supporters and we felt we were in good shape.

"It was a good opportunity to get to the final and when it goes like that you feel sorry for them all."

The result ends for another season Moyes's hopes of winning a first trophy in his 10 years at Goodison Park.

"As you can imagine we are not full of the joys but we now need to focus on the rest of the season," he commented.

"I'm just really disappointed we are not able to give the supporters a final because they were fantastic and when you lose to your local rivals it is even harder to take."