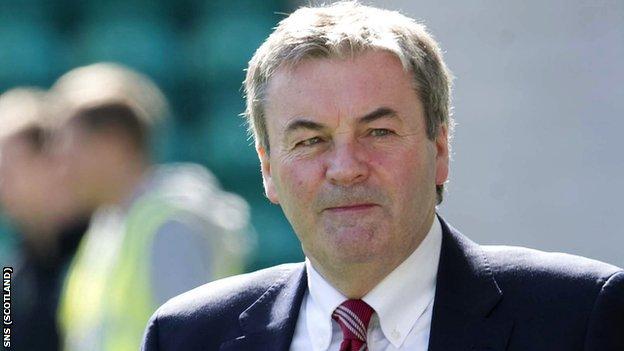 MacDonald, who has been involved in the Scottish Premier League and Scottish Football League in recent years, fears fans are becoming disillusioned.

And he feels self-interest is at the root of the problem.

The link between the fans and the club has been broken in many, many places.

"Surely we can see Scottish football going down the pan. Where's the fun? On every front, we're under attack.

"The fun and the passion's gone out of football and all these politcal chairmen have kicked things about. 'Here's the chance, Rangers are down, let's get them'. It's absolutely pathetic.

"We've got a structure that works perfectly well. We've got expert people, we should listen to them.

"Every single agenda that's coming out is all about how it affects each individual club, which is nonsense. We've got to say, 'What is the best for Scottish football?'"

"I take the view that they're the chiefs, they set the map, we try to follow them and that's how business works," he said. "You get good people in and you take their advice.

"The situation we've got in Scottish football, and I include the Scottish Football League, is that they should be seen as the chiefs and point the way for us. We should take their advice and back them.

"Unfortunately, every chairman in the SFL and the SPL think that they're Chief Sitting Bull and that's the problems. We've got chiefs everywhere and not any Indians."

The 10 non-Old Firm SPL clubs are pushing for change to voting rights in the top flight, a move that has come since Rangers entered administration.

"Everybody can give a bit and we can't have 10 people meeting in a room and leaving Celtic outside the room. We can't have discussions about whether Rangers' administrators can vote on something else.

"We all need each other and we've all got to give a bit, but we must get this sorted soon and there's got to be one league.

"The SFL is full of people that have also got interests and, if you put a mic in front of them or a photo opportunity, it makes their day. We've got to get away from this.

"The link between the fans and the club has been broken in many, many places.

"I think what's happening at Rangers, personally speaking, is disgusting; the way the fans have been left out of every decision-making process.

"Whether it's Rangers or Hearts or some of the other clubs that are rumoured to be in a state, I just think it's all wrong."