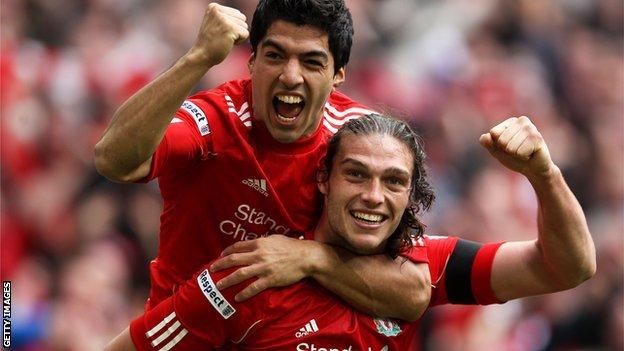 Liverpool boss Kenny Dalglish said his side are not the finished article after they beat Everton to secure a spot in the FA Cup final.

The Reds won the Carling Cup in February but are eighth in the Premier League after faltering badly.

"It is called a work in progress," said Dalglish. "We have said that before and there is no need for us to change.

"After the Carling Cup I said we are not the finished article and we are saying the same thing now."

Liverpool came back from conceding a Nikica Jelavic goal to beat their Merseyside rivals at Wembley courtesy of goals from Luis Suarez and Andy Carroll.

The victory came on the back of criticism of the Anfield side's stuttering league form and days after the club's hierarchy parted company with director of football Damien Comolli.

"It is testament to everybody's character," said Dalglish following a victory which puts Liverpool in their first FA Cup final since they beat West Ham to lift the trophy in 2006.

"They have held themselves together and had the resolve to come back and respond positively to what has not been a great period in the club's history.

"It is not a time for us to sit down and individualise performances and go through everyone who has been on the pitch. It is a time for us to enjoy the moment, be respectful to Everton and over the next two or three days get back to work and make sure we are fully focused on the league games and the cup finals still to come.

"Winning gives you a good feeling. If you can't enjoy winning, you might as well put the lid on the box because it is time up. You can get a taste of it, think it is great for us to go forward and try to win something else because you enjoyed that so much or you can go complacent and say that is great, we have won a trophy, that is all I wanted to do.

"The most important thing is that the players want to be more successful than they have been."