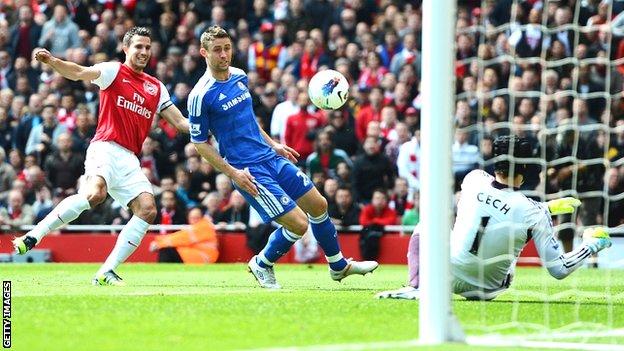 Arsenal's hopes of a top-four finish remain in the balance after they were held to a goalless home draw by an under-strength Chelsea.

The Blues made eight changes to the team which beat Barcelona on Wednesday, but comfortably contained the Gunners.

In a poor first half, Robin van Persie hit a post and Laurent Koscielny headed against the bar after making two fine clearances to thwart Chelsea.

No goals, leg-weary and disjointed. For Chelsea, Tuesday's Champions League semi-final second leg was probably the bigger priority but their understudies proved capable. Their main aim was containment, and they achieved that, but Barcelona will be a lot more threatening that the Arsenal of today.

For two clubs who have played out so many classic encounters over the years, this once deserves to be forgotten as quickly as possible.

But it could have significant ramifications for both in their respective bids to finish in the Champions League places.

Arsenal stay third with three matches remaining, but Tottenham and Newcastle are six points adrift with two games in hand.

Those two are a point ahead of Chelsea with one game in hand, meaning the Blues' place in next season's Champions League may rest on them winning the competition this time around.

They take a 1-0 lead into the second leg of their semi-final against Barcelona on Tuesday, a game which seems to be taking greater importance by the day.

Three days on from that and with the trip to Spain a high priority, it was hardly surprising Blues boss Roberto di Matteo made so many alterations to his starting line-up.

Petr Cech, John Terry and Gary Cahill were the only men to keep their places, but Chelsea's side still featured plenty of quality and they were perfectly comfortable in the early stages.

They passed and moved with pace and intelligence as the home crowd grew frustrated with their team's lethargic opening.

It was Arsenal who created the first clear-cut chance - Van Persie meeting Theo Walcott's free-kick at the back post but only managing to direct his free-kick against the woodwork.

However, that failed to spark the hosts into life and it required a last-ditch interception from Koscielny to prevent Fernando Torres meeting Florent Malouda's low centre.

Two minutes later, Malouda fed Salomon Kalou over the top and he eluded on-rushing goalkeeper Wojciech Szczesny, only for Koscielny to arrive with impeccable timing once more.

Arsenal's usual fluency was absent but they finally found some rhythm shortly before half-time when Koscielny headed a free-kick against the bar and Van Persie saw a drive parried by Cech.

The start of the second half was as underwhelming and uneventful as the first, although Arsenal's hopes were dented by the loss of Walcott and Tomas Rosicky to injury.

The arrival of former Gunner Cole raised the volume inside Emirates Stadium, but the pattern of play did not alter as Chelsea contained Arsenal while occasionally looking to strike on the counter-attack.

Van Persie skewed wide after being released on the right by Alex Song, and was then foiled by Cech after one turn too many.

Arsenal could find no way through and it took a fine challenge by Koscielny to deny Sturridge at the end.

"They locked the game completely. They had to win as well but tried to lock the game, catch us on the break. We lacked a bit of fluency, played with the handbrake on, feared not to be exposed on counters and were not complete spontaneous.

"It was a very tough game physically but we showed great character and were a bit unlucky with our chances. We knew would have few chances but they had none, zero.

"I felt it was more a nervous thing today than 'end of season'. Chelsea are very strong physically in the middle of park and had a very defensive-minded midfield. They killed the game and we were not quick enough to open them up, but still had chances."

"We put ourselves in good position with breaks, we just missed some quality in the final pass to get a goal. Arsenal play a similar game to Barcelona with possession and rotation. We contained them well but going forward we looked dangerous.

"We had a few players out because of injuries and illness today and I selected the best team to get a result. It was out third game in less than six games, it's impossible to use the same 11 players but we have a great squad and today they showed their quality and worth.

"The demand is incredible; it's crazy that we have to play in such a short period of time this amount of games. It's dangerous for the players because the risk of injury increases.

"There are four games left and three home games - we've got a tough schedule but we can do it [finish in the top four]."