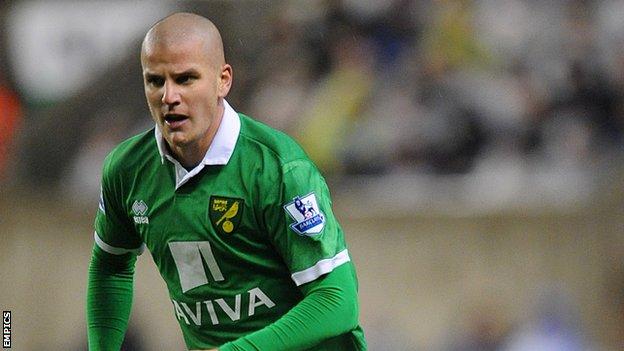 Norwich City will be without injured defenders Marc Tierney and Daniel Ayala for the remainder of the season.

Tierney, 26, has received surgery on a groin problem while 21-year-old Ayala will continue to undergo treatment on a knee ligament complaint.

"Marc's had a small operation to his groin. He'll be out until the summer," boss Paul Lambert told BBC Radio Norfolk.

"Daniel has to take a bit of a break from it," he added.

"But the two of them will be back for pre-season."

Left-back Tierney, who has not featured for the Canaries since December, broke down during an attempted comeback in a reserve game against Sunderland earlier in April.

Spanish centre-half Ayala's season has been fractured by injury problems, after he - a League Cup defeat by MK Dons.

With Zak Whitbread still sidelined by a calf strain, veteran Adam Drury and youngster Ryan Bennett have proved capable deputies in the Norwich back line.

They were part pf the side that secured a memorable victory at Tottenham on Monday which moved City onto 43 points for the season.

Norwich's performance drew plaudits, but Lambert was nonplussed by the extra attention the result gave his team.

"It doesn't bother me," he said. "I know what the team have done. We're a right top side.

"We don't sing from the rafters because sometimes when you do that you get a fall. I don't need anybody else to tell me what's right or what's wrong."