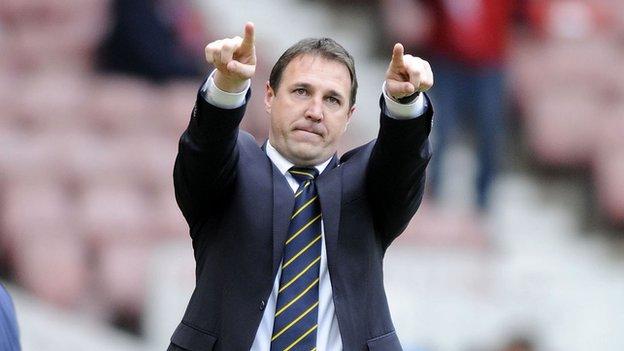 Cardiff City manager Malky Mackay says he is looking forward to the final three weeks of the season as they seek to cement a place in the play-offs.

The Bluebirds go to Barnsley on Saturday intent on at least keeping hold of sixth in the Championship.

Cardiff are then home to Derby on Tuesday, host Leeds United next weekend and finish at Crystal Palace.

"It's really quite exciting; there's four games to go and we're in the top six," Mackay said.

"This is the point now... where you just look after yourself and that's still the case.

"It is down to ourselves... what we produce depends if we're going to be in the play-offs or not."

Cardiff are unbeaten in six games, although five draws in that time has seen them lose some ground in the table.

But Mackay is positive about his side's form and is confident that they can hold off a chasing pack headed by Brighton, Middlesbrough and Leicester.

"We've got a bit of momentum going into these last four games and it's something that we've got to keep believing in," Mackay added.

Mackay has two other injury doubts ahead of the trip to Oakwell, as Joe Mason is rated touch and go for the clash with a groin strain while fellow striker Rudy Gestede is struggling with a hip problem.