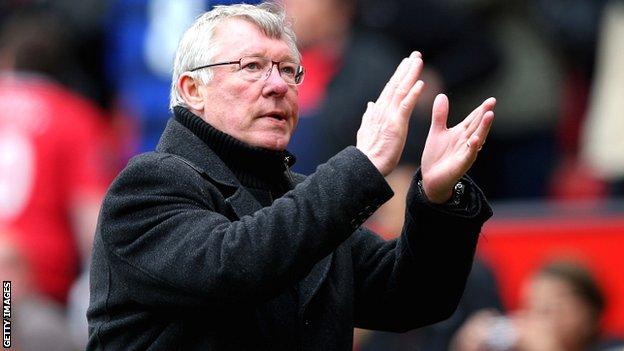 United are five points ahead of City with five games left and on Wednesday City boss Mancini stated: "It is finished. Five points is too much."

But Ferguson said: "I think he picked the wrong time to say that.

"There are five games still to go. The twists and turns of the Premier League, it's fascinating."

But the deficit was reduced on Wednesday as Mancini's side swept past West Brom and United suffered a shock defeat by Wigan.

"We have to put it in a bit of perspective," said Ferguson, whose team had taken 34 points from their previous 12 games.

"You drop points in the second half of the season. We have done it most years.

"There has been an odd year when we have gone on a long run without losing but a couple of years back we lost 4-1 to Liverpool and won the league.

"You do drop points on the run-in. City and ourselves have both experienced that.

"But from the position we were in a few months ago, to where we are today, we have to be delighted.

"The great part of our club is that we do recover, and we have to recover from Wednesday."

Paul Scholes will feature against Aston Villa at Old Trafford on Sunday after the midfielder was rested at Wigan.

The 37-year-old came out of retirement in January and has been instrumental in United's quest for a 20th top-flight title.

"Paul has shown his influence since he came back but I did the right thing to rest him on Wednesday," Ferguson added.

"He will be fresh on Sunday and he will play."

Ferguson confirmed his squad had suffered no fresh injuries ahead of Villa's visit.