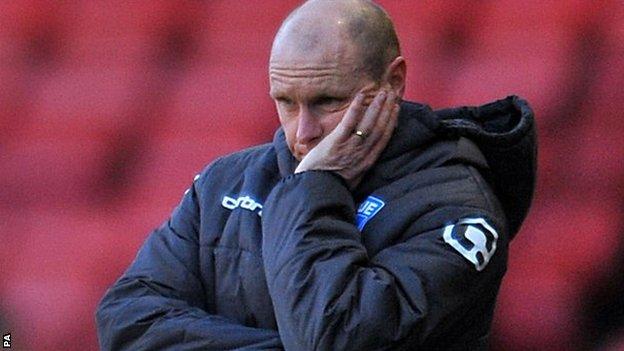 Darlington interim manager Craig Liddle has ruled himself out of a return to the post next season, regardless of the club's league status.

The Quakers are 11 points adrift of safety in Blue Square Bet Premier with four games left, and could be relegated with defeat by Bath City on Saturday.

"If there's something in terms of youth development here I'll consider it."

Liddle took on the role of manager on an initial caretaker basis when former boss Mark Cooper and assistant Richard Dryden left the club in October.

However subsequent financial troubles and administration forced the club to abandon the search for a permanent successor, as the former Quakers defender took on first-team affairs along with existing youth development duties.

"I've stated before I see my future in youth development, but I've got to be mindful there's a lot of money needed at Darlington at first-team level," he continued.

"What I've said to the interim board, the club and the administrators is I'll get the season out of the way because I owe that to the club and supporters to do that."

Meanwhile Liddle has told the players there is still much to play for despite the prospect of relegation.

Without a win since mid-December, and having lost 12 of 16 games during the calendar year, Darlington have the opportunity to end that run against already-relegated Bath.

"I've told the boys they're playing for their futures and the future of the club," Liddle said.

"We need to keep the interest alive in the football club for people to stump the cash up to keep us going.

"They're playing for their futures whether it's with Darlington or somewhere else."