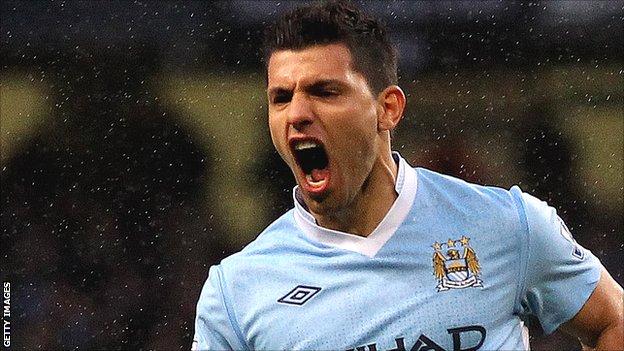 Sergio Aguero has refused to give up on the Premier League title after Manchester City closed the gap to rivals United to five points.

City manager Roberto Mancini said after the match that the title race was over.

But Argentina striker Aguero told BBC Radio Manchester: "Football is strange. When United come here [on 30 April] we will see what happens."

He continued: "The supporters gave us the message that Wigan had scored and it was one more thing to make us happy during our game because we were winning.

We play quite regularly for Argentina, he knows my movements and we seem to connect quite well

"It is important now that we go to Norwich and win the game. We're looking forward to the next game and hopefully we will win."

Aguero, 23, took his tally for the season to 26 in all competitions with a brace against the Baggies.

David Silva completed the scoring for City, soon after Aguero's international team-mate Carlos Tevez had netted his first goal since May 2011.

Tevez was making his first start for the club since refusing to warm up during the Champions League defeat to Bayern Munich in September.

"He's a fantastic player, just like Edin and Mario," said Aguero. "We play quite regularly for Argentina, he knows my movements and we seem to connect quite well."