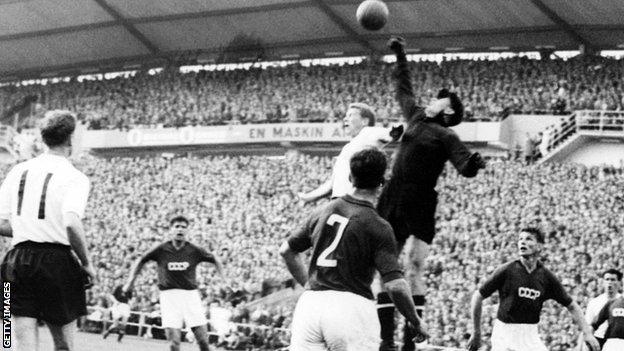 Set against a backdrop of political turmoil and mass withdrawals, the first European Championship finals would be dominated by a goalkeeper, as Lev Yashin led the Soviet Union to glory in France.

The competition may bear little resemblance to this summer's finals, with just four teams competing in the final showdown, but the legacy of what was then called the European Nations Cup would ensure the presence of a European tournament on the footballing calendar for good.

Henri Delaunay, the secretary of the French Football Federation, first came up with the idea of a continental competition in 1927, but it was not until the birth of Uefa in 1954 that his idea gained any serious support at all.

"The joy of seeing Yuri Gagarin flying in space is only superseded by the joy of a good penalty save.

"What kind of a goalkeeper is the one who is not tormented by the goal he has allowed? He must be tormented! And if he is calm, that means the end. No matter what he had in the past, he has no future"

Even then, West Germany - World Cup winners of 1954 - had no interest and Italy, another major European force, also politely declined.

England also decided not to enter and there were genuine concerns that the qualifying tournament would fall short of the required 16 countries, but a few last-minute entries ensured the event went ahead as planned.

After more political rows, which saw Spain withdraw from the quarter-finals, France was chosen as the host nation for the final four as Yugoslavia and Czechoslovakia joined the hosts and the Soviets in early July 1960.

Yashin - known as 'the Impregnable Spider' - was in superb form and an inspired performance in the final ensured that Milan Galic's deflected effort was all the Yugoslavs had to show for 90 minutes of domination.

Slava Metreveli's equaliser took the game into extra-time and, as Yugoslavia began to tire, Viktor Ponedelnik headed in to claim the Soviet Union's first and only trophy.

By the summer of 1960, Yashin, then 30, was already a considerable force in European football and had won Olympic gold in Melbourne four years earlier.

Such was his prowess that he was even an influence on England's greatest - Gordon Banks.

Banks told BBC Sport: "Lev Yashin was first-class, a real super goalkeeper. His positional play was excellent, but everything he did was top-class.

"He had outstanding agility for such a big guy, he was excellent. One of the best I've seen.

"He was the model for goalkeeping for the next 10 to 15 years, without a doubt."

Banks had established himself in the top flight by the summer of 1960 but still took inspiration from Yashin.

"I used to pride myself on my positional play and Yashin did everything more or less the same," he added.

"I visualised myself doing some of the things he was doing, and even though I was already playing in the top division I used to learn from him.

"We only used to see the international matches on television but you could pick up things from watching him. I used to try to emulate what I'd seen him do and think 'oh, he does it like that'."

After watching the Soviets take the crown, Banks and the rest of his England colleagues would have to wait until the finals of Euro 1968 for their chance to compete on the continental stage.

Under Sir Alf Ramsey, the World Cup winners would go on to finish third - their best finish in the Euros to date - losing to a late goal to the then Yugoslavia in the semi-final.

Banks said: "I'm not sure what the thinking was behind not entering it until 1968.

"You'd think that the FA would be keen to win any sort of international competition. We had a good side.

"We'd won the World Cup in 1966 but we hadn't just said 'that's it now, we can't do any more.' We got our heads down and had a real good run of results, and we were confident going into the final tournament that we could win it.

"We wanted to win every game that we played. That was no exception, but we were unlucky."

That run of luck has continued for England ever since - will this summer be any different? Banks is not so sure.

"We can play well one game and then not so well in the next. This tournament is coming very quick for the new manager as well. We'll just have to wait and see."