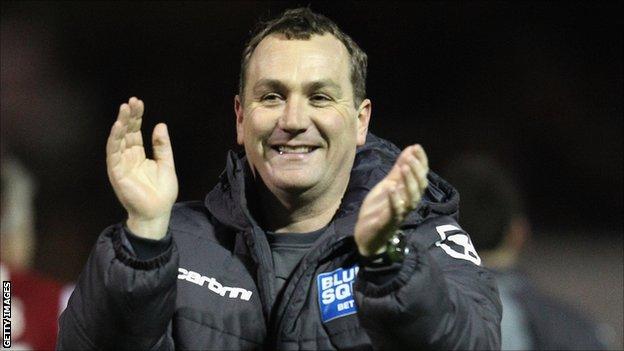 Micky Mellon is prepared to be patient as his Fleetwood team edge closer to promotion to the Football League.

"It's such a big deal for the players and it's such a massive prize at stake," said the Fleetwood boss.

"To get over the finishing line will be such a great achievement, but league seasons and titles are won over 46 games, not just one performance."

A win against second-placed Wrexham would have been enough for Fleetwood to clinch the Blue Square Bet Premier title.

But they will guarantee promotion to League Two with victory against Lincoln at Highbury on Friday evening.

Mellon said his team's performance against Wrexham, in front of a crowd of nearly 5,000 people, was understandably subdued given the circumstances of the match.

"I'm pleased we picked up a result but I think the occasion showed in the way we played," he added. "We were nowhere near what people would normally expect of us.

"It was important we didn't lose the match and we got some kind of result, so we're delighted.

"I thought Wrexham played very well and looked a lot more composed than us."