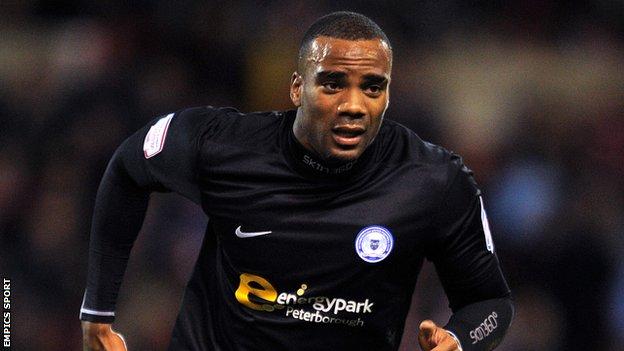 The 24-year-old arrived at London Road in August with 14 goals from 77 league starts for Macclesfield, but has already reached double figures for Posh.

"I know people were a bit sceptical about my goal ratio when I signed," he told BBC Radio Cambridgeshire.

"But at Macclesfield I was always out wide," he continued.

"This is my first season as an out and out striker and I always said if I played up front I'd get goals."

The former Nottingham Forest forward's brace against Coventry on Saturday has taken his tally to 10 from 21 starts for Darren Ferguson's side.

He is one goal behind Posh's top scorer Paul Taylor and admits the pair have been engaged in a friendly rivalry.

"Once I got to seven or eight I thought 'If I can get into double figures as soon as possible it would be a good achievement in my first season in the Championship'," he explained.

"Now I've got 10 I'm only one behind 'Tayls' and hopefully I can catch him and finish top goalscorer.

"The way Tayls had been playing we thought he was going to finish top but I've got my goals and I'm in form."

An ankle injury forced Sinclair to come off early against his former club Forest on Monday.

But he is eager to prove his fitness for the trip to hometown side Leeds United this weekend.

"It's one of the main games of the season for me, being from Leeds," he said.

"I've never played at Elland Road before and I definitely want to feature in the game.

"A lot of my friends support Leeds so they've told me not to score too many. Hopefully I'll go there and get a couple."