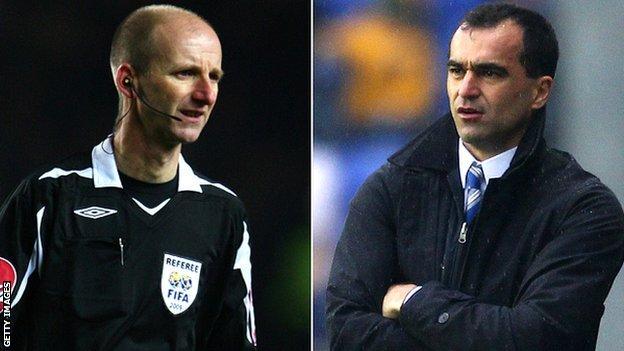 Wigan Athletic manager Roberto Martinez says referees' chief Mike Riley has called him to apologise for mistakes made by officials during Saturday's 2-1 defeat at Chelsea.

Both of the home side's goals at Stamford Bridge appeared to be offside.

After the game Martinez branded some of the officiating "disgusting", but has since mellowed and praised Riley's actions in contacting the club.

"It is a very honourable way to face mistakes," Martinez said.

The Football Association have also confirmed the Spaniard will not face disciplinary action over his post-match comments.

"Mike Riley told me that he understands that with the level of refereeing in this league [officials] should get those calls right," the Spaniard revealed.

"We were unfortunate at the weekend and we've had a few bad calls over the season. There are many other clubs that have had them as well. It's important that we don't feel too aggrieved; that's part of the game and we need to accept it.

"In many ways the luck is going to level out.

"This is why the game is such a controversial subject between all of us, because good and bad calls are part of the game."

Wigan are 19th in the Premier League but are level on points with Blackburn and QPR above them and are only in the relegation zone on goal difference.

The Latics picked up eight points in March and Martinez is keen for the recent improved form to continue in the run-in.

"I don't want to keep talking about those [refereeing errors]," he said. "They stopped a positive result for us but it was the performance that allowed us to be in the position where we could get a positive result.

"We have a group that is used to facing adversity and a group that will maintain their level to the end of the season."