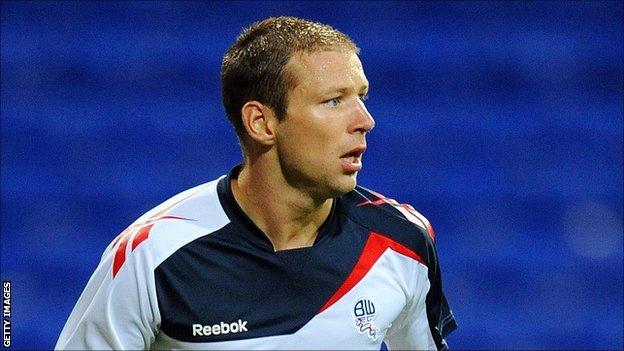 Bolton Wanderers need to "use their experience" and "dig deep" to avoid relegation from the Premier League, according to defender Gretar Steinsson.

Owen Coyle's side remain a point outside the bottom three, despite defeats by Fulham and Newcastle.

Full-back Steinsson told BBC Radio Manchester: "It's in our hands and it's all about experience because we've been in this situation before.

"Players need to dig deep and start grinding out those results."

The Iceland international continued: "You play slightly differently when the pressure is on. You can't play risky football, you need to use your experience.

"There's a lot at stake and everyone involved has to realise how big it is to stay in the Premier League."

Bolton had won three consecutive matches prior to their 3-0 home defeat by Fulham on Saturday.

And they could not halt Newcastle's charge towards the top four on Monday, losing 2-0 at St James' Park.

The two defeats during the Easter weekend mean that, if other results go against them, Bolton could find themselves in the bottom three by the time they face Swansea on 21 April.

But captain Kevin Davies believes the side can take heart from their display against the Magpies.

"I think it was a good performance and we're all wondering how we've come away with nothing," said the veteran striker.

"We've created the better chances and I don't think (goalkeeper) Adam Bogdan has had too much to do.

"It's disappointing but we've got to move on because we've got some massive games coming up."