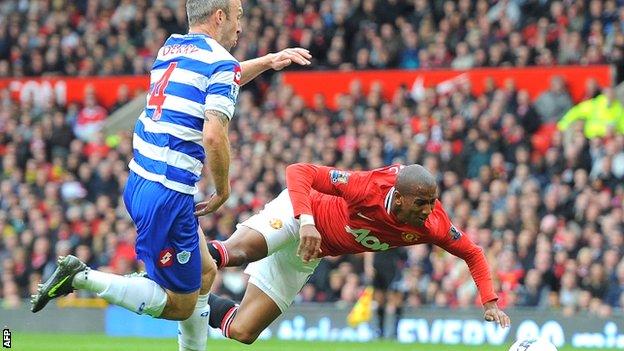 QPR's Shaun Derry has described the Football Association's decision to uphold his red card against Manchester United at Old Trafford as "ridiculous".

Derry was sent off for a foul on Ashley Young during Sunday's 2-0 defeat.

Replays showed minimal contact with Young, who was in an offside position when the ball was played.

"There was no explanation as to why it was not overturned, or any indication of why I got sent off. The whole scenario is quite bizarre," he said.

"I don't know what they do at the FA, but it's not working."

The 34-year-old captain served a one-match ban which ruled him out of QPR's 3-0 victory over Swansea on Wednesday.

Rangers boss Mark Hughes said his side were "losing faith in referees" following the dismissal of Derry by referee Lee Mason.

Derry, who joined QPR from Crystal Palace in 2010, added: "I thought it was a foregone conclusion that it would be overturned and I would be available for Swansea. Everyone thought the FA would put it to bed that way.

"To miss out on the next game is ridiculous really.

"The e-mail we got back from the FA was one line telling me my appeal had not been successful. That's as far as it went.

"It was the single highlight of my career to lead a Premier League side out at Old Trafford, so I was bitterly disappointed to say the least. It is a tough pill to swallow."