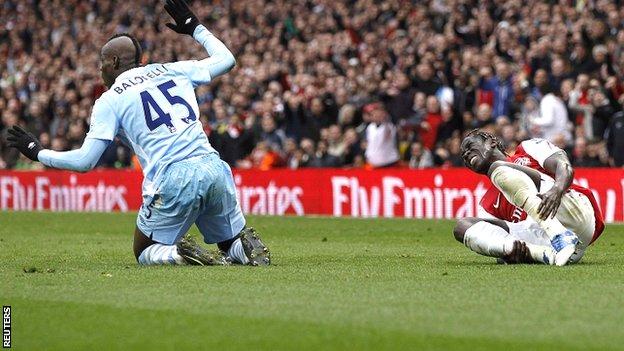 Manchester City striker Mario Balotelli will speak to the club at the end of the season to determine his future.

After Balotelli's red card in Sunday's 1-0 loss at Arsenal, City boss Roberto Mancini stated he would "probably" try to sell the 21-year-old this summer.

"At the end of the season I will speak with the club and we'll see," Balotelli said in a statement provided by his agent to Italian news agency Ansa.

"I'm very sorry for what happened and for the disappointment caused to City."

Balotelli added that his apologies were directed "especially to Roberto Mancini, who I admire and wish well".

The Italian was sent off in the 90th minute for a second bookable offence as City were beaten at Emirates Stadium.

He escaped punishment for a challenge on Alex Song early in the match but could not avoid a fourth dismissal in two seasons with the club.

According to Ansa, Balotelli phoned Cesare Prandelli to apologise but the Italy coach told his player to say sorry publicly.

In line with a code of conduct introduced upon taking over in 2010, Prandelli left Balotelli out of his squad for the friendly against the United States in February.

That followed Balotelli's four-match suspension for a challenge on Tottenham's Scott Parker in January.

But the player said he did not expect to be punished by Prandelli again following his actions against Arsenal.

"I didn't break the code of ethics," said Balotelli, who added that he hoped to be at Italy's April training camp ahead of Euro 2012.

"I already missed out on the national team for foolishness and I wouldn't do it a second time. Let's wait for the final verdict of the ban."

Prandelli, speaking two weeks before Italy's two-day training camp is due to take place, said he would look at video evidence before deciding what to do.

"I'll evaluate from the videos of the sending-off whether or not to apply the code of ethics for Balotelli," he said.

Mancini has already cast doubt over the forward's future with City, who are now eight points behind Premier League leaders Manchester United.

"I don't have any words for his behaviour," said Mancini, who signed Balotelli from Inter Milan for £24m in August 2010.

"I hope for him he can understand he is in a bad way for his future and I really hope that he can change his behaviour in the future. He will probably not play in the next six games.

"I need to be sure I always have 11 players on the pitch and with Mario this is a big risk."

Earlier this season, Balotelli escaped unhurt when a firework was lset off inside his home.

In March 2011, it emerged he threw a dart at a City youth-team player.