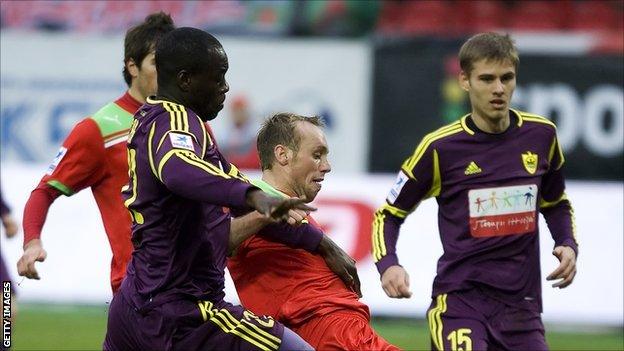 Congo-Brazzaville defender Chris Samba insists he will not be driven from Russian club Anzhi Makhachkala after suffering racist abuse.

A banana was thrown at the 28-year-old during his side's 1-0 defeat at Lokomotiv Moscow last month.

Samba, who joined Anzhi from English Premier League side Blackburn in February, said: "I will never let the small community of racists break me.

"I'm a strong character and will keep fighting for my team."

Samba added: "I am thoroughly enjoying my time in Russia and although I was of course angry at the racism incident, along with the rest of the football world, racist issues here are no different to what I have experienced in other countries."

The incident was the third of its kind to be directed at an Anzhi player in the past year. Roberto Carlos, a former Brazil and Real Madrid defender, had bananas thrown at him twice last year.

In 2010, Lokomotiv Moscow fans unfurled a banner showing a banana in a display directed at Nigerian striker Peter Odemwingie, who went on to join West Bromwich Albion in the Premier League.

With Russia set to host the 2018 World Cup, organisers of the competition have pledged to step up action to curb racism in Russian football.