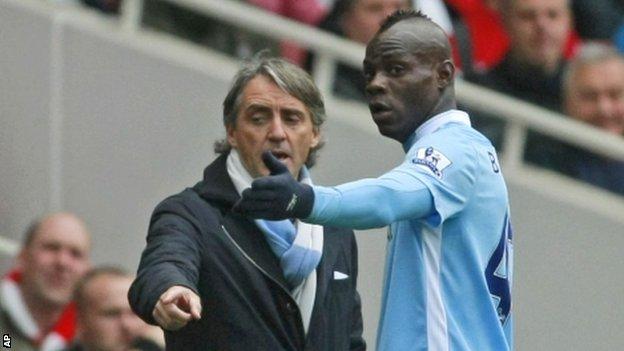 Manchester City manager Roberto Mancini cast doubt over Mario Balotelli's future after his red card in the 1-0 defeat by Arsenal.

His challenge on Alex Song, missed by the referee, may be investigated by the Football Association.

Asked whether he would try to sell Balotelli, Mancini said: "Probably."

He admitted Balotelli, who has scored 17 goals in 31 club appearances this season, is now unlikely to play again this campaign.

"I like him as a guy and a player," added Mancini, who signed Balotelli from Inter Milan for £24m in August 2010.

"He is not a bad guy and a fantastic player but I'm very sorry for him as he continues to lose his talent and his quality.

"I don't have any words for his behaviour.

"I hope for him he can understand he is in a bad way for his future and I really hope that he can change his behaviour in the future. He will probably not play in the next six games.

"I need to be sure I always have 11 players on the pitch and with Mario this is a big risk."

Balotelli, dismissed for two fouls on Bacary Sagna moments after Mikel Arteta's 87th-minute goal gave Arsenal victory, has now been sent off twice this season, and Mancini added: "He's young and could be my son and when you are young you can make mistakes.

"Mario made a mistake and I hope for him - not me - that he can change.

"He clearly created a big problem but he has also scored important goals for us this season. He needs to change his behaviour if he wants to continue to play. I have seen players like him, who have all this talent, and they are finished in two or three years.

"Mario should change, he must change, and I hope for him that he does."

Mancini refused to concede defeat in the title race even though he now faces the prospect of losing out to rivals United.

And the Italian insists he is still the manager to lead City forward.

"No, it's not mathematically (over), but it's clear now that it's very difficult," he added. "We have a game in three days and we will try to win. Never say never in football.

"In life until it's over you should do your best. In the end if we don't win it's probably because they (United) did better than us.

"It's clearly difficult (to lift the players) but we play in three days and this is good. We are a professional team, with professional players. It's important we start to win and finish the championship well."