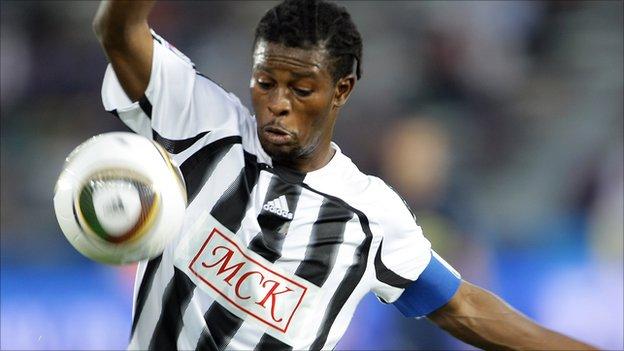 Zambia's Given Singuluma scored twice after his compatriot Rainford Kalaba had opened the scoring.

Mazembe, the 2009 and 2010 winners, will now play Sudan's Al Merreikh for a place in the group stages.

Third Round Line Up

The DR Congo team are back in the competition, having been disqualified in 2011 for fielding an ineligible player.

Kalaba, who helped Zambia to win the Africa Cup of Nations in February, opened the scoring after 10 minutes with a long-range effort.

He then turned provider to set up Mputu Mabi for his goal 12 minutes later.

Two goals in two minutes from Singuluma just before half-time put Mazembe in control at the break.

Mazembe captain Mputu Mabi got his second from the penalty spot in the 68th minute and completed his hat-trick with a header five minutes later.

Six-time winners Al Ahly of Egypt beat Ethiopian Coffee 3-0 behind closed doors in Cairo and that was the same score on aggregate.

The visitors were reduced to 10 men on the hour mark and Mohamed Aboutrika scored the resulting penalty and ensured the win with his second in the 76th minute.

Ahly's great Egyptian rivals Zamalek needed a late Amr Zaki penalty to go through on away goals against Africa Sport in Ivory Coast.

The hosts looked on course for a shock result when Soumaila Belem scored in the 57th minute and again five minutes later.

Zaki scored the all-important away goal with only nine minutes left to play.

Not such good news for another DR Congo side, AS Vita Club, as they lost 3-2 at home to Algeria's AS Chlef, and that was the same score on aggregate.

The visiting Algerians opened the scoring in the first minute through Ali Hadji, who doubled the lead just before half-time.

Yves Magola Mapanda pulled one back for Vita from the penalty spot before Hocine Achiou extended Chlef's lead in the 85th minute.

The hosts scored a consolation goal in injury time.

Chlef will now take on Sudan's Al Hilal to decide who goes through to the group stages of the tournament.

There was a stunning fight back by Nigerian club Sunshine Stars as they beat Recreativo de Libolo of Angola 3-0.

That made it 4-4 on aggregate with Sunshine going through on the away goals rule.

The Nigerian champions Dolphins however were knocked out as they lost 1-0 in Cameroon to Coton Sport.

Jacques Haman with the only goal of the game after 19 minutes to make it 2-2 on aggregate with the 2008 runners-up going through on the away goals rule.

Raja Casablanca crashed out of the competition despite a 3-0 victory over Ghanaian champions Berekum Chelsea, unable to overturn a 5-0 deficit from the first leg. Second-half goals from Mohamed Oulhaj, Hassan Tair and Yassine Salhi helped Raja salvage a degree of pride.

Holders of the Orange CAF Confederation Cup, MAS, beat Horoya of Guinea 3-0 thanks to a brace from Hamza Abourazzak and the other from Abdelhadi Halhoul. The Moroccans went through 4-1 on aggregate.

The matches involving Stade Malien (Mali) - Tonnerre (Benin) and Djoliba AC (Mali) and URA (Uganda) has been rescheduled due to the civil unrest in Mali. A new date has yet to be confirmed.