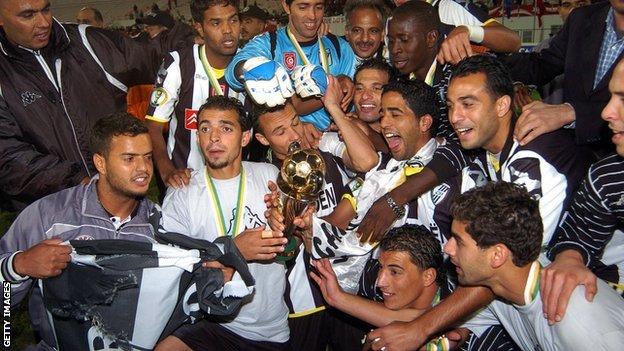 Two-time Confederation Cup winners CS Sfaxien of Tunisia have been knocked out of this year's tournament losing 2-0 to visiting AC Leopards of Congo-Brazzaville.

Sfaxien, who won the trophy in 2007 and 2008, started the second round second leg game on Saturday with a 2-1 lead from the first leg.

But Eric Nyamba's two goals for Leopards, the first just before half-time and the second in the 77th minute, saw his side through 3-2 on aggregate.

Leopards will play either Nigeria's Heartland or Heartland or US Haut Nkam of Cameroon in the next round the two sides drew 0-0 in the first leg of their tie.

Algerian side Entente Setif, who were runners-up in 2009, also crashed out of the tournament despite a 3-1 win at home over Simba of Tanzania.

The result in Algeria made it 3-3 on aggregate with Simba going through on the away goals rule.

Simba played much of the game with 10 men after Juma Nyoso was sent of after just 12 minutes.

Setif looked like they had sealed a place in the third round thanks to two goals from Mohamed Amine Aoudia and one from Mokhtar Benmoussa.

But an injury-time strike from Emmanuel Okwi was enough for Simba to advance.

Next up for Simba will be Al Ahly Shandy of Sudan, who beat Mozambique's Ferroviario de Maputo 2-0 in their second-leg match to go through 3-0 on aggregate. Nadir Eltayeb scored both goals.

InterClube had goalkeeper Tsherry to thank as they won a penalty shoot-out against Tana Formation to advance to the last 16.

Tsherry blocked a penalty and scored from the next kick to give the 2011 semi-finalists a dramatic victory.

The Angolan club had won the match 2-0, Joel converting a penalty just before half-time and Moco adding a second goal 14 minutes from time, to cancel out their first-leg defeat and force the shoot-out.

The first round will be completed Monday when Real Bamako of Mali enjoy home advantage as they try to overcome a 1-0 deficit against Gamtel from Gambia with a tie against Wydad Casablanca of Morocco awaiting the overall winners.