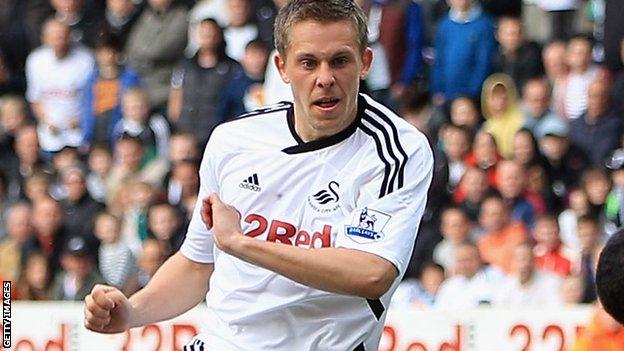 "We've got confidence in our ability and I'm sure we'll bounce back soon," said Sigurdsson.

"We've played against Newcastle and Tottenham, teams that are up there playing for Champions League football.

"We lost two games in a row [against Norwich and Stoke] and we bounced back and won three games on the spin especially against Man City and a Fulham team who were very strong.

"We've done it before and we'll do it again."

Swansea suffered their 13th league defeat of the season as Papiss Cisse scored twice to secure victory for Newcastle at the Liberty Stadium.

"It was very disappointing to say the least," said Icelandic international Sigurdsson.

"They had one chance in the first half and scored from it and in the second half [they] had one or two chances and took them. They were very ruthless in front of goal.

"We had a few half chances and a couple of shots but that's about it.

"[We] dominated for large periods of time in the first and second half and probably with a little bit of luck we would have got that first goal or equalising goal and the game would have been a lot different."

Swansea's game at Queens Park Rangers on Wednesday will be the first of four games against the Premier League's bottom five.

Despite their lowly position Mark Hughes's side have recently beaten Liverpool and Arsenal at Loftus Road and Sigurddson says Swansea should be wary.

"They're down there but they've got a fantastic squad and good players," added the former Reading player.

"There not easy to beat at home so it will be a good game. We need to pick ourselves up over the weekend and be ready for the next game."

Sigurdsson, the Premier League's Player of the Month for March, is on loan at Swansea from German club Hoffenheim until the end of the season.

But the 22-year-old is not thinking of his future at present and reaffirmed his commitment to Swansea until the end of the season.

"I'm just concentrating on Swansea City and thinking about the next game and that's what I'm doing," he said.

"It's not entirely up to me what I'm doing in the summer but I'm very happy here and I'm playing for a fantastic team and hopefully things will get sorted in the summer."