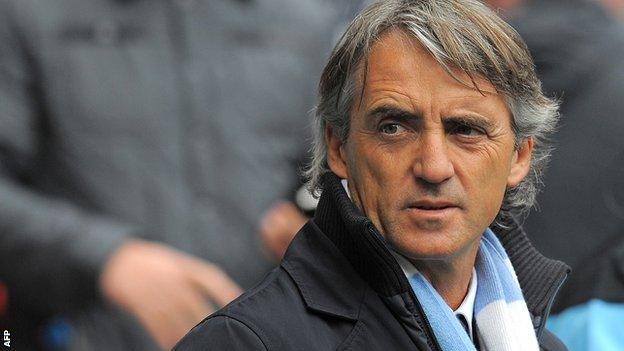 Roberto Mancini accepts his job may not be guaranteed long-term, even though he believes he has laid the foundations for Manchester City's future success.

His position has become the subject of speculation recently following a series of slip-ups as the title race hots up.

Mancini, who succeeded Mark Hughes in December 2009, said: "We have improved a lot as a team, as players, as a club.

"When you choose the job you should know anything can happen any moment but I don't have any problem with this."

Despite a sustained challenge for a first league title since 1968 and last season's FA Cup success - which ended a 35-year trophy drought - Mancini knows things can change very quickly.

City, having led the table for most of the season, now trail rivals Manchester United by five points with seven games remaining having only won once in their last four league matches.

While Real Madrid's former Chelsea and Inter Milan boss Jose Mourinho has been linked with the Etihad there has been no suggestion from City's Abu Dhabi-based owners that they are considering a management change.

Mancini is thankful for that and enjoys working with chairman Khaldoon Al Mubarak.

City face a must-win game at Arsenal on Sunday, shortly after the final whistle at Old Trafford, where United can open up an eight-point gap if they beat QPR.

Mancini has already conceded that the race would be over if City lose at Arsenal and Sir Alex Ferguson's men win.

Anything can happen. We lost four points in two games. It is possible that can happen to United

But he is determined that will not happen and is convinced the gap can still be closed.

Mancini said: "If they [United] win all their games, congratulations, they deserve to win the title.

"But seven games from the end I think anything can happen.

"We lost four points in two games. It is possible that can happen to them."

City are hopeful top scorer Sergio Aguero will be fit to return after his much-discussed foot problem while Joleon Lescott will be welcomed back in defence after a hip injury.

Midfielder Samir Nasri is also available against his former club after missing last week's draw with Sunderland due to a family problem.

Arsenal manager Arsene Wenger, meanwhile, believes United will win a 20th title because they have men who can deliver when it comes to "money time".

Wenger remains impressed by their ability to dig out results when not firing on all cylinders.

"Manchester United are surprisingly in a comfortable position, no-one expected them to be because they did not look absolutely irresistible this year," he said.

"You could see that again on Monday night against Blackburn, but they managed to win the game.

"If Manchester United make it to the title, it is really down to experience."