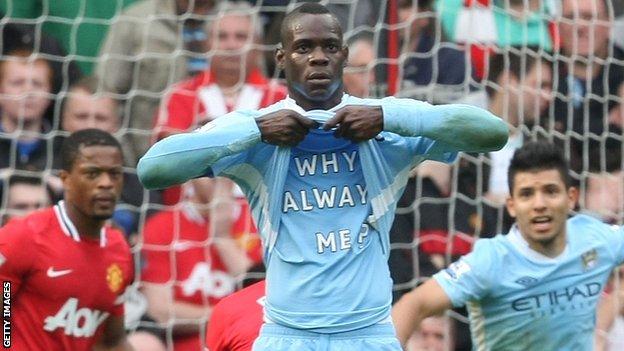 Manchester City manager Roberto Mancini says he jokingly told Mario Balotelli he might have punched him in the head every day if he was his team-mate.

Mancini said he could understand why his squad sometimes got frustrated with the enigmatic 21-year-old striker.

The City boss said: "I told him, if you played with me 10 years ago I would give you every day maybe one punch in your head.

"There are different ways to help a guy like Mario."

Mancini added: "I don't speak with him every day, otherwise I would need a psychologist, but I speak with him because I don't want him to lose his quality.

"If Mario is not one of the best players in the world it will be his fault, because he has everything.

"Mario can be one of the top players in Europe. I don't want him to lose his talent."

But Mancini believes Balotelli's behaviour on and off the pitch is blown out of proportion.

The striker has scored 17 goals in 29 appearances for City this season.

"There are some people who think bad things against other people, like Mario," he said.

"Every time Mario does something, [it] is like a war.

"There are other people on and off the pitch that do worse than Mario and no-one says anything because maybe they play for an important team or are not like Mario."