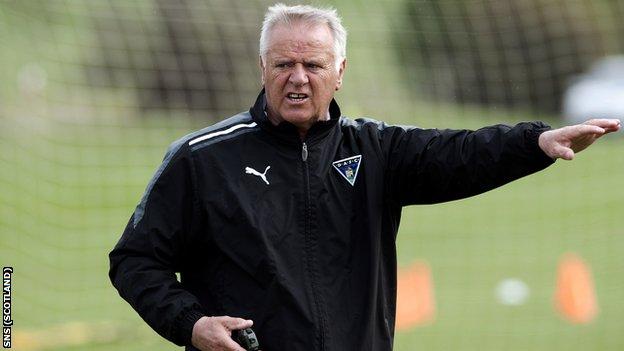 "The players have been terrific to work with since I arrived a few weeks ago," Jefferies told BBC Scotland as he prepares to face former club Hearts.

"They have plenty of enthusiasm and they want to do well and help keep the club in the SPL."

Dunfermline have not won a home match in the league this season but Jefferies hopes to break that unwanted record against Hearts on Saturday.

Paulo Sergio, the man who replaced Jefferies at Tynecastle in August, may chose to rest key players ahead of their Scottish Cup semi final with Celtic on the following weekend.

However, Hearts coach Gary Locke insists that the Edinburgh outfit are anxious to improve on their sixth place standing and will not be easing off at East End Park.

"They have their own agenda and we are not expecting any favours," explained Jefferies.

"We have to look after ourselves as it didn't go for us last week against Dundee United.

"We know we need a win to make sure we can close the gap on Hibs."

When Jefferies was sacked along with his assistant Billy Brown, now on the coaching staff at Hibs, he made sure that Locke stayed on at the club.

And Jefferies insists that Locke will one day go on to become a successful manager.

"He (Locke) is steeped in the club just the way I was when I supported them." said the Pars boss.

"He is a young lad trying to make his mark on the coaching side and eventually into management.

"He was always earmarked as having those qualities when I first stared working with him."

Goalkeeper Bernardo Dominguez-Fernandez arrived at the club this week but Jefferies said that the Spaniard is likely to be on the bench for Saturday's match.