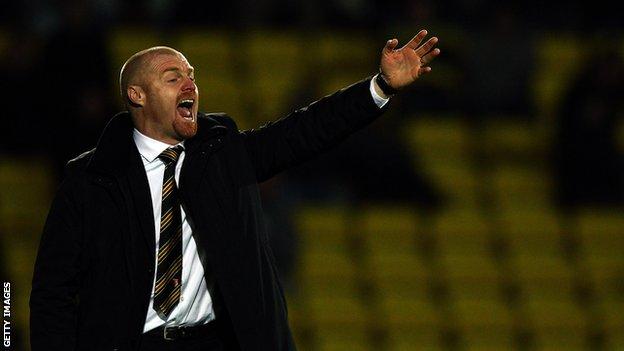 Watford boss Sean Dyche claims his side will chase a top six spot free of pressure, while their rivals contend with the weight of expectancy.

The Hornets are six points shy of the Championship play-offs.

"If you look at the other clubs they are under pressure. There's a lot of expectancy on them," Dyche told BBC Three Counties Radio.

"We've got a nice situation where we can enjoy the run-in while making sure we give a good account of ourselves."

Watford have climbed the table steadily since November, moving from 21st place and the prospect of a relegation dogfight to 11th, courtesy of a run which has seen them take 41 points from 72 available.

And while they have an outside chance of sneaking into the play-off mix with six games to go, Dyche is keen to shift the focus onto clubs he suggests have more to lose in the promotion race.

"We've built a nice mentality. We've come through some tough times in the early part of the season and that's really galvanized the group," said Dyche, who is in his first season of management.

"The season has got a long way to go. Six games is not a massive amount of games but it's massive in terms of what they could bring.

"We're in that 'What if?' scenario. It would be beyond expectation to even be sniffing around the play-offs.

"The lads have deserved that and I'm looking for them to go again. There'll be no taking the foot off the pedal."