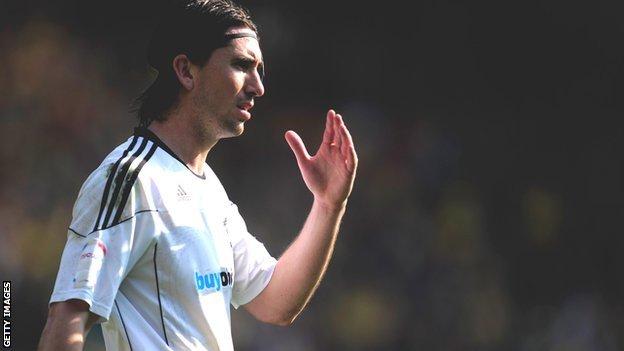 Derby County captain Shaun Barker's knee injury is likely to sideline him for up to 16 months.

The defender dislocated his right kneecap and suffered ligament damage against Nottingham Forest in mid-March.

Barker was initially ruled out for a year but physiotherapist Neil Sullivan said the damage revealed in surgery 'couldn't have been much worse'.

Sullivan told BBC Radio Derby: "It's a terrible injury and not the sort of thing you see commonly in football."

The 29-year-old centre-half underwent a three-and-a-half-hour operation in London to reconstruct his right knee last week.

The surgery also revealed damage to the patella femoral ligament, meaning he will face a struggle to be fit for the start of the 2013/14 season.

"Until you actually get inside the joint you can never fully appreciate the magnitude of what happened," Sullivan added.

"Shaun will have a brace to wear to protect the knee throughout the early stages of recovery, probably for around eight weeks.

"Following that it's a building process, starting back with the basics."

Barker has been told that, despite the seriousness of the injury, he will be able to make a full recovery.