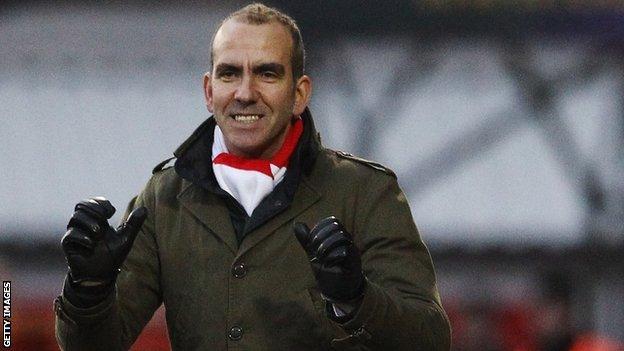 Manager Paolo di Canio has insisted he will not enter contract discussions at Swindon Town until they have secured promotion to League One.

Di Canio signed a two-year deal at the County Ground last May, with the option of extending for a third season.

And with the Robins currently top of League Two with a five point cushion, chairman Jeremy Wray is keen to keep hold of the Italian.

"I want to think about us going up otherwise you distract yourself too much.

"My agent met them [the club] a few weeks ago. I know something but I don't even know if they have another appointment.

"I'll be here and work hard and then see what's going on. Everything could change if we go up.

"There are people who will sack you when you're third in the league and there are managers who aren't going to be sacked even if they are struggling. Football is strange.

"I said it's better not to think about it and when it is the right time, they should come to me and say 'we want to sack you' or 'we want to offer you this and this is the plan for the future'."

Di Canio had a difficult start to his Swindon tenure with the club sat 21st after his first month in charge. But their run of just one defeat in 23 league games catapulted them up the table and they have remained in the top spot since February.

The former West Ham striker says that he has learnt from the mistakes he made when he first arrived at the County Ground and is keen to start shaping his squad for next season as soon as possible.

"There is an intention from the club to keep me here and my intention is obviously positive and I won't wait until July to build my team (for next season)," he added.

"If I remain it will be a tough season and I don't want to make a start like we did this season, that was too much.

"The fact I am still thinking about the start of the season means it still hurt me in some way because this is my job and I know I did something wrong and I don't want to fall in the same trap."