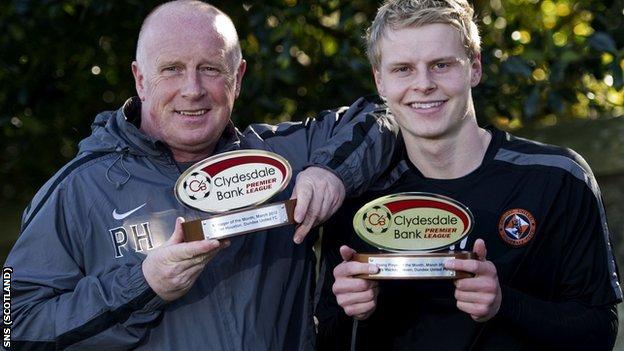 Boss Houston oversaw four wins out of four in the league, with winger Mackay-Steven featuring in all victories.

The 22-year-old also scored United's second in the 2-0 victory against Hibernian at Easter Road.

Mackay-Steven won the young player prize for February while Houston's award is his first this season.

The exciting winger's performances have won him rave reviews but he is slightly embarrassed by tongue-in-cheek comparison's to world player of the year Lionel Messi.

United fans have been chanting ''Are you Messi in disguise?'' at recent matches.

But Mackay-Steven, who was playing for Airdrie United last season, is quick to dismiss any similarities with the Barcelona superstar.

''Messi is on a different planet and it's a bit surreal to be compared to him the things he can do with a ball are unreal," he said.

"For me football is all about enjoying yourself and the fans have been great with me from day one."