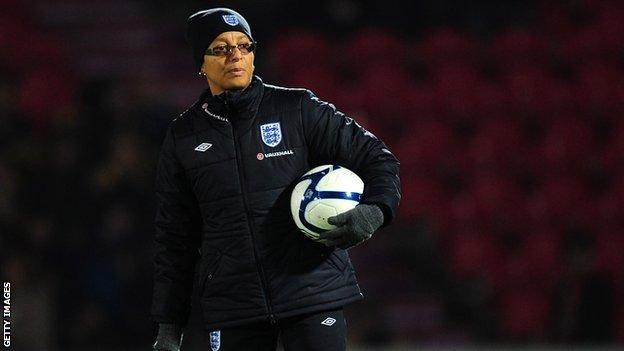 England manager Hope Powell says there are "several" women who have the coaching qualifications to take charge of a men's Premier League team.

"There are more and more females with the credentials," Powell told the BBC.

"I have a pro licence and there are several other women around the world who have pro licences."

Her comments came after former Northern Ireland boss Lawrie Sanchez said he thought there would be a top-flight female manager within the next decade.

The Barnet manager said in a documentary entitled 'Sexism in Football?', which will be broadcast on Wednesday at 2245 BST on BBC One: "I have a bet going with a mate that there will be a female Premier League manager within 10 years.

"Whatever is said at the top level, we're in an entertainment business. Someone, somewhere will appoint a female manager.

"Whether [she is appointed] because she's the best person out there or because of the commercial aspect that comes with it, the reason will be that it is the best situation for the club."

"The sport has been so male-dominated for so long that you're going to get people who are going to have to break ground and encounter things for the first time. There is still a long way to go but things are changing for the better and the rate of that change will grow quicker because barriers are constantly being broken down and women should be judged on merit."

Powell, who will lead Great Britain's women's Olympic team at London 2012, also said she expected the first female appointed as a league boss to be hampered by an intense media scrutiny.

"The priority is about the football and the coaching," she told BBC Sport.

"But the challenge would be, if a female was appointed at the highest level, how the media take that.

"If that female isn't successful then would it be 'see we told you - she couldn't do it'? Or if she was successful would she get too much media attention that would be too much to bear?"

The 45-year-old said she has never been approached - or applied - to take over a professional men's side, although she has previously said she would consider managing a men's team.

Reports suggested Powell was targeted for the vacant job at Grimsby in October 2009, before she dismissed the story as "lies".

But she said: "I've always said if a career opportunity presents itself I'd be foolish not to look at it.

"If I was in marketing I'd do the same; if I was in commercial I'd do exactly the same - so why wouldn't I do the same in football?"

West Ham vice-chairman Karren Brady, who became the first female managing director of a Football League club aged just 23 when she took charge at Birmingham in 1993, added: "[Sexism] is one of the hardest things to change in any organisation. It really comes down to culture.

It is a man's game, however in terms of what goes in and around the support of those players can it be more diverse and inclusive? Yes it can

"It only comes from change right at the very top where people really fundamentally, honestly and passionately believe that things need to be changed - not just what do we look like."

Football's male-orientated environment has arguably shown some signs of change in recent times.

Uefa appointed Karen Espelund to its committee and the Norwegian is now considered one of the most powerful women in world football.

There are also a growing number of female assistant referees, including Sian Massey, while the Football Association appointed Heather Rabbatts, formerly executive deputy chair at Millwall, as its director last year.

Rabbatts said: "It is a man's game, but in terms of what goes on around the support of those players can it be more diverse and inclusive? Yes it can.

"We've moved a long way from those few lone black players in terms of the diversity of race we see on the pitch which I think is absolutely brilliant.

"Now can we get some diversity around what happens in football, which particularly includes and represents women?"