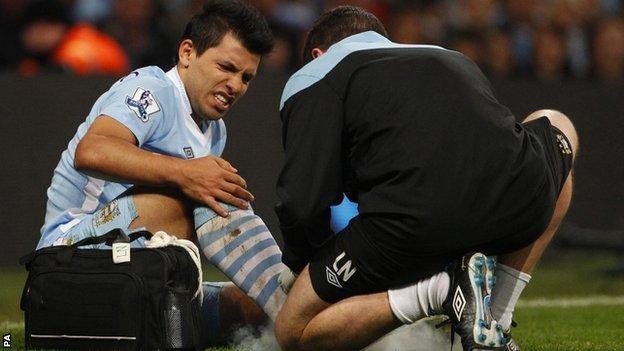 Manchester City striker Sergio Aguero expects to return to the side to face Arsenal on Sunday after a foot injury.

The Argentine missed City's 3-3 draw with Sunderland on Saturday after picking up what City boss Roberto Mancini described as a "stupid" injury.

"I got back from practice on Wednesday and and there's no pain anymore," he tweeted. "If it all goes well, I'll be at coach's disposal on Sunday."

I wasn't able to speak earlier because a lot of unfunded rumours were published, and there were simply too many to disprove

Team-mate Joleon Lescott is available after overcoming a groin injury.

Mancini had refused to elaborate on Aguero's injury when pressed but the striker has clarified the situation.

"I wasn't able to speak earlier because a lot of unfounded rumours were published, and there were simply too many to disprove," said Aguero.

"During the match against Chelsea, I injured my ankle and it was sprayed with a topical anaesthetic that caused a burn on the upper part of my right foot.

"The injury worsened after a few days and when boils appeared I was told I wouldn't play against Stoke and then against Sunderland.

"You can imagine how I felt, being out when my team is trying to win the championship.

"But it is what it is and it's no time for moping. I just want to recover as soon as possible and get back to giving the team my best every game."

Lescott, who has missed City's last five games after suffering a problem in the Europa League defeat by Sporting Lisbon last month, has also recovered.

"I'm defo fit now been back training for 4/5 days now, so I will be available for selection on the weekend," tweeted the centre-back.

City have dropped points against Stoke, Swansea and Sunderland in the 29-year-old's absence.

The lead could be extended to eight points by the time City next play, with United facing QPR on Sunday afternoon.

Meanwhile, Portuguese side FC Porto have been handed a £16,700 fine by Uefa for the racist conduct of their supporters at the Europa League round of 32 first-leg match against City.