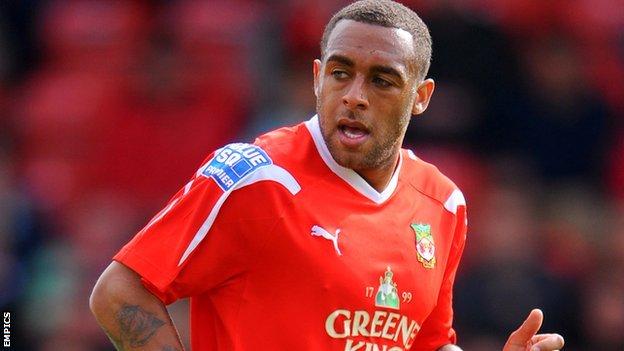 An own goal from Mark Creighton maintained Fleetwood's 28-game unbeaten run as he inadvertently nudged Gareth Seddon's header into his own net.

Wrexham ended the game with 10 men as Joe Clarke was shown a second yellow.

Fleetwood could win the Blue Square Bet Premier title and subsequent promotion to the Football League for the first time in their history on Friday against Lincoln.

Micky Mellon's men should have capitalised on the party atmosphere inside Highbury early on but top-scorer Jamie Vardy, racing onto to Seddon's flick, wasted a great chance as the unmarked striker fired over from just inside the box.

Seddon also should have broken the deadlock but the striker could not guide Vardy's teasing right-wing cross past Wrexham keeper Joslain Mayebi, chesting the ball goalwards rather than heading it.

Wrexham almost punished Fleetwood's generosity in front of goal as the visitors had a chance cleared off the line as Danny Rose kept out Creighton's towering header from Dean Keates's right-wing corner.

Wright had already missed a good chance early in the second-half when Andy Morrell's team took the lead.

Keith Briggs's weak defensive clearance went straight to Wright and the Wrexham man squared it to strike-partner Speight, who cracked the ball past Davies, with a little help from Fleetwood full-back Shaun Beeley's deflection.

And Fleetwood's evening could have got worse as referee Andy Davies might have sent Vardy off for a nasty-looking challenge on Wrexham defender Nat Knight-Percival - but the official did not award a free-kick.

Wrexham led for just seven minutes when an own goal from their usually reliable defender Creighton gave Fleetwood hope that promotion could be sealed with three games remaining.

Seddon headed Alan Goodall's free-kick across the six-yard box and Creighton, whose keeper Mayebi should have collected Seddon's dangerous header, deflected the ball into his own net with Fleetwood's Nathan Pond ready to pounce.

Wrexham's evening got worse when midfielder Clarke was dismissed with 15 minutes remaining.

The visitors, however, had the best chances to win as Keates had a chance well saved by Davies before Mathias Pogba rattled the crossbar with a thunderous close-range shot.

Fleetwood will have to wait to secure the two points they need to seal their fifth promotion in seven years and rapid rise from the North West Counties League.

"I'm pleased picking up a result but I think the occasion showed in the way we played.

"We were nowhere near what people would normally expect of us.

"It was important we didn't lose the match and we got some kind of result, so we're delighted.

"I thought Wrexham played very well and looked a lot more composed than us."

"We played well and we stood up. I thought it was two very good teams going head-to-head trying to win the game.

"I'm disappointed with a point really because I thought we could have nicked the three.

"There should've been a sending off and it was horrendous from (Jamie) Vardy. He left the floor with two feet and Nat (Knight-Percival) could've got seriously injured."