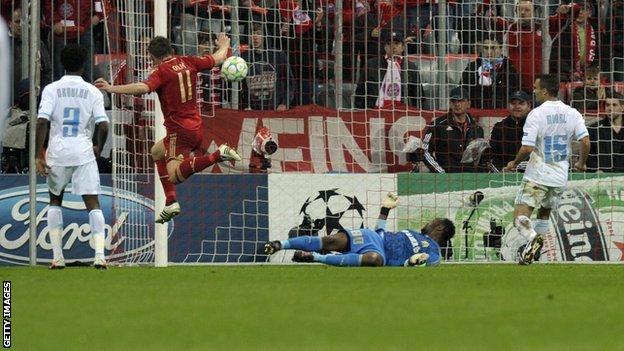 Bayern Munich eased into the semi-finals of the Champions League as they brushed Marseille aside.

The German side quickly added to their 2-0 first leg lead when Franck Ribery crossed for Ivica Olic to slot in at the near post.

Toni Kroos powered a shot against the Marseille post before David Alaba crossed for Olic to again sidefoot in.

Bayern were hardly troubled in a routine win and will meet Real Madrid or Apoel Nicosia in the last four.

The form book had suggested a Bayern victory and so it proved as the German side ensured a second Champions League semi-final in three seasons and remained on course for a final at their home ground, the Allianz Arena, on 19 May.

Bayern, four-time winners of Europe's top prize, had won 12 of their last 13 games at home in the Champions League, while Marseille had lost eight of their last nine games.

If the French side were to mount an unlikely comeback, it was imperative they took any chances that came their way as manager Didier Deschamps wanted controlled aggression from his side rather than a gung-ho approach.

But, after Loic Remy created an early opening for himself by making space for a shot which he powered straight into the arms of keeper Manuel Neuer, Marseille then wasted a gilt-edged chance.

Jeremy Morel had a clear sight of goal from 10 yards only to have his poor side-footed effort blocked by Neuer's legs.

The miss proved pivotal as Bayern immediately went up the other end and punished the French side, ex-Marseille winger Ribery surging into the visitors' box before sliding over a cross that Olic to eased into the net.

Marseille had been big underdogs to start with and though Bayern had left top-scorer Mario Gomez and winger Arjen Robben on the bench, it soon looked a case of how many the hosts would score.

Keeper Steve Mandanda and the woodwork were the main barriers as the Marseille stopper fended away a venomous Anatoliy Tymoshchuk volley and Kroos thundered a shot against the post.

Ribery looked in the mood against his former club and he broke away to release Alaba, who crossed for Olic to slot in his second.

Bayern largely went through the motions from there on, with Ribery coming closest to scoring when his shot from an acute angle was saved by Mandanda, before the keeper also blocked the rebound from the same player.

Brandao headed a rare Marseille chance over as Bayern completed a victory that never looked in doubt.

Bayern coach Jupp Heynckes said: "We showed authority and in the end were deserved winners, although Marseille created the first good chances. Altogether we played a very smart game.

"Both goals were very well played.

"I'm happy for Olic because he not only played well, but he scored and had a huge impact on the game. He's a bonus for the rest of the season. We have hard matches ahead of us and I need players like him who can decide games."

Marseille coach Didier Deschamps: "If we had converted those early chances it could have been different.

"We tried to get the best out of this situation. But Bayern are deservedly in the last four. The adventure was beautiful.

"Yet it was not always logical what we did on the pitch to get to the quarter-finals. I guess there is some sporting logic to this result tonight."