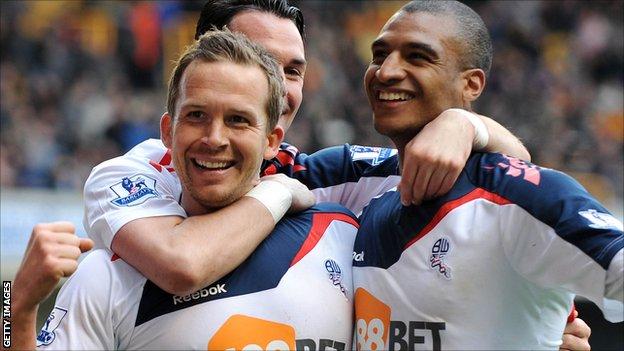 Owen Coyle's side have won both Premier League matches since Fabrice Muamba's collapse in an FA Cup tie at Tottenham.

"With what's happened in the last couple of weeks, we can't ask for any more," Davies told BBC Radio Manchester after Bolton's 3-2 victory at Wolves.

"I think the manager's delighted with the response from all of the players."

Davies, who scored the decisive third goal at Molineux, continued: "It's not just the ones that are starting, but from everyone in the squad. Everybody's up for it and wants to play their part."

Bolton had fallen behind early in the second half to Michael Kightly's goal for the Premier League's bottom club.

But a penalty from winger Martin Petrov and further strikes from Marcos Alonso and Davies ensured the Trotters would remain outside the bottom three, despite a late goal from Wolves winger Matt Jarvis and victories elsewhere for relegation rivals Wigan and QPR.

"We've got to take care of our own shop," added Davies. "If we keep doing that, come the end of the season, I think we'll be OK.

"We take care of our own business and hopefully we can pull one or two more of the teams above us into it.

"We can't do any more than we're doing at the minute, but it's important that we take it into next Saturday (at home to Fulham) and we try and pick up another win."