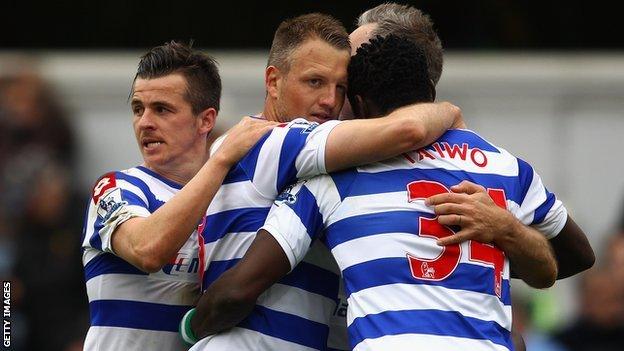 Queens Park Rangers are appealing for fans to help them identify the spectator who threw a coin at assistant referee Stuart Burt and plan to ban the guilty supporter for life.

Burt was hit by the coin in QPR's 2-1 win over Arsenal on Saturday.

"The club appeals to fans who saw the coin-throwing incident to come forward and assist our enquiries," said QPR.

"Anyone caught throwing an object onto the pitch will be issued with a lifetime ban from Loftus Road."

Burt was struck on the back of his neck by a missile which appeared to come from the Ellerslie Road stand after he awarded an injury-time free-kick to Arsenal.

The Football Association is understood to be aware of the incident and is supporting efforts by QPR and the police to identify and punish the perpetrator.

Rangers will examine CCTV footage and interview stewards but have also urged eye-witnesses to come forward.

Referee Mike Dean, who is reported to have included the incident in his match report, halted Saturday's game for two minutes and brought his assistant in from the touchline as supporters began pointing to where the coin had come from.

The Metropolitan Police said they had yet to receive a complaint over the matter.

In February 2009, Aston Villa fan John Billington, who threw a 50p piece at a referee's assistant, got a five-year football banning order and was fined ÂŁ2,300.