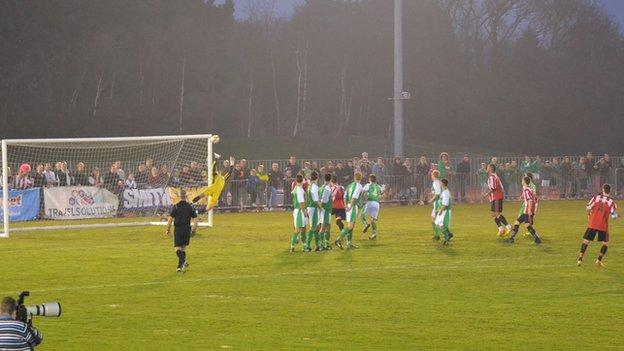 The Green Lions came from two down at half time to beat Guildford City 4-2 in the semi-final on Friday.

"I didn't want to lose our focus on the league, but we're in the final and it's a great end-of-season reward," he told BBC Radio Guernsey.

"We play against teams in the league above, but the chairman's not happy because it costs him £3,000 per win."

An early Simon Cooper brace put Guildford 2-0 up within 11 minutes, but the Green Lions hit back after the break through Dom Heaume and Ross Allen, who had earlier missed a penalty.

"It was an exceptional game, so exciting, it had everything. I'm proud of the lads," Vance continued.

"The two goals we conceded were what we highlighted before, because we've watched them three times. We're disappointed about that.

"That aside, I thought we were the better side in the first half. We were trying to play football and we were doing everything but score. I was enjoying the performance. We just needed to nick a goal and it would change the game, and it did."

With promotion and the league title assured, Vance sees his side's progress in the competition as a good barometer for how they can perform against stronger teams next season.

"We had to be on our game. You could see right from the whistle that they were a good side. The way they played the ball and their accuracy of where they put the ball was first class, but I thought we were worthy winners."