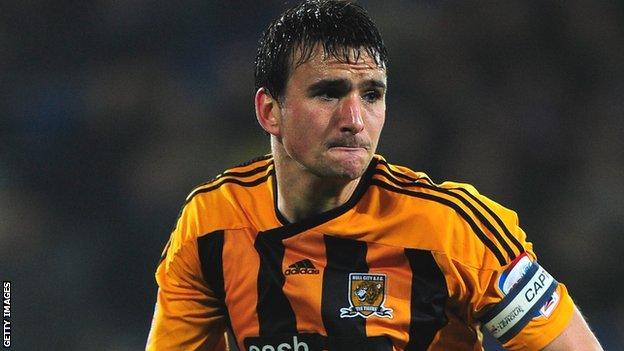 Hull City captain Jack Hobbs has been ruled out for the rest of the season with a knee injury.

Hobbs was forced off at half-time in Saturday's 2-0 home defeat by Coventry.

Sonny Bradley, 19, came on for the injured defender for his Hull debut and Liam Cooper, 20, was starting his first league game of the season.

"The young lads are going to get some great experience. It'd be better if it wasn't under these circumstances," boss Nick Barmby told BBC Radio Humberside.

With fellow defender Joe Dudgeon also out for the rest of the campaign with a hamstring injury and James Chester struggling with the same complaint the Hull manager is short of defensive options.

However, despite the injury concerns, he remains confident the Tigers can still push for a play-off berth: "Until it's mathematically impossible we won't be giving up.

"We're in a bit of a rut but we're a tight-knit group and we're going to keep fighting," he concluded.

Saturday's defeat leaves the KC Stadium based side five points outside the play-off places with six games to play.