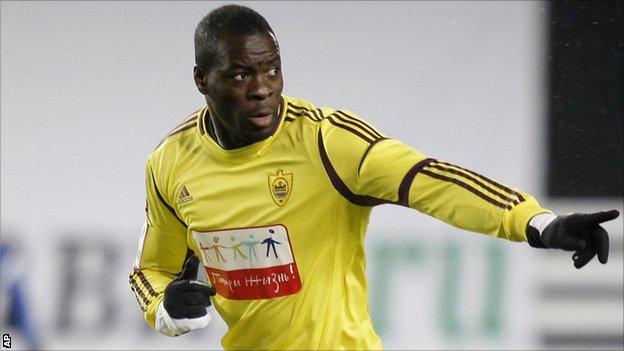 Russian football authorities want legal action to be taken against a student who threw a banana at Congo and Anzhi Makhachkala's Christopher Samba.

The head of the Russian FA's ethics committee called for the action after the perpetrator of the 20 March attack was identified late last week.

"We have sent the results of our investigation to the law enforcement body," said Vasilev Vladimir.

"I believe he (the perpetrator) should be penalised for it."

Former Blackburn Rovers defender Samba was on his way to the dressing room after the final whistle of the match at Lokomotiv Moscow, which Anzhi lost 1-0, when a banana came flying from the stands and landed nearby.

The 27-year-old player picked it up and threw it back and said afterwards that he hoped it served as an example of "how not to behave".

Brazil veteran Roberto Carlos was twice the victim of banana attacks when he played for Anzhi at Saint Petersburg and Samara last year, prompting league bosses to appeal to fans to stop tarnishing the reputation of Russian football.

Nigeria and Spartak Moscow striker Emmanuel Emenike was also subjected to racial abuse recently and was fined for his gesture to the crowd in reaction to the chants.