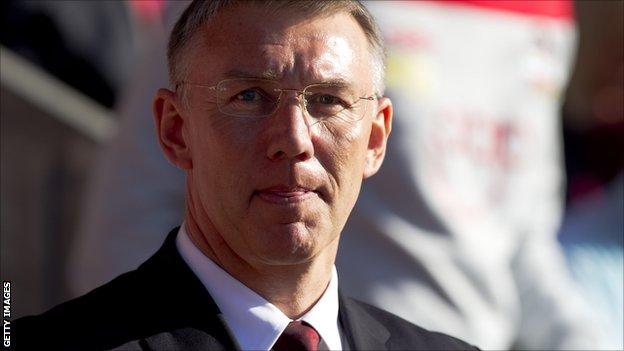 Adkins' side host south-coast rivals Portsmouth at the weekend, having lost to Blackpool 3-0 on Saturday with Lambert missing with a pelvic injury.

His table-topping side are now just two points ahead of second-placed Reading.

"Rickie Lambert does not need an operation, he has not had a operation," Adkins told BBC Radio Solent.

The Southampton striker has 28 goals this season and has been an integral member of the promotion-chasing side.

We are very optimistic he will be fit for the weekend. Rickie will be desperate to play on Saturday but has to be right

"We thought he was going to be fine for Saturday but he wasn't," added Adkins.

"He trained on Thursday, did half the session, came off and was very uncomfortable.

"The last thing we want to do is lose Rickie Lambert for a long period of time. We have other strikers here who are fit so we utilised them.

"Rickie had more treatment back in Southampton. We didn't want him sat on a coach for long periods of time, like I say we were very hopeful but he wasn't quite right.

"But we are very optimistic he will be fit for the weekend. Rickie will be desperate to play on Saturday but has to be right."

And Adkins says he is relishing the visit of struggling Pompey, which offers the chance for the Saints to bounce back from their defeat by Blackpool.

"Our lads don't need any motivation, especially against Portsmouth," he said.

"Our players know exactly how important this game is to our city, our fans and our football club.

"We've had 40 games this season and the players work very hard at Southampton.

"I have honest, hard-working players and for us to have led the league and been in the top two for most of the campaign is testament to that."