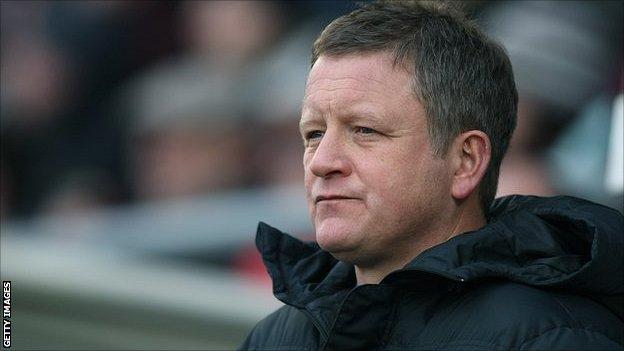 Oxford United boss Chris Wilder has ruled out his side gaining automatic promotion after Saturday's defeat.

With six games left to play, the result leaves Oxford seven points behind third-placed Crawley, who also have a game in hand.

"We looked like a team that was happy to nestle in the play-offs," Wilder told BBC Radio Oxford.

"We did have serious ambitions about getting into the top three, well that's definitely gone now."

The U's were beaten 2-1 by Morecambe on Saturday, and gave a performance that infuriated Wilder.

"Quite rightly we take the plaudits when we go away and get a victory at Accrington. We've got to take the criticism when we don't play well.

"Now we have a serious battle on to get into the play-offs. We have to improve and be better than we were at the weekend otherwise we'll find our season just petering out."

Meanwhile, Oxford have been boosted by the news that Michael Duberry, Jon-Paul Pittman and Oli Johnson will all be in full training on Tuesday and available for the Easter fixtures.

"Oli Johnson just felt his hamstring tighten in training last week but he will be OK," added Wilder.

"Dubes [Michael Duberry] will be training and JP [Jon-Paul Pittman] has been running for a week or so and feels fine so he will be available. It all gives us options and variety as we come into the crucial stage of the season."