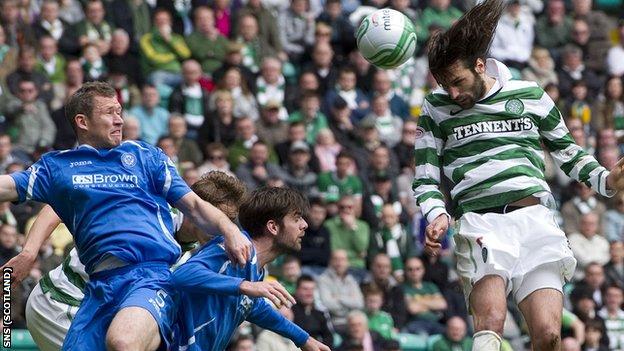 Georgios Samaras insists Celtic will have no thoughts of revenge when they take on their League Cup conquerors Kilmarnock at Rugby Park next Saturday.

The Greek forward was on target in the 2-0 win over St Johnstone, which leaves Celtic needing a point to clinch their first championship in four years.

However, Killie stunned Neil Lennon's side at Hampden earlier this month to lift the term's first silverware.

"It was a final, they won it, it's finished. We don't go there with our minds on revenge.

"We haven't had the greatest results in the last two weeks but we showed great character in the second half against St Johnstone and won the game.

"Now we need to go to Kilmarnock with the same character and win that game as well.

"We were nervous in the first half, there was a strange atmosphere, I don't know why but in the second half we went out and enjoyed our football which is what we need to do from now on.

"We need to start to play good football, create chances and do what we did before March, which wasn't a great month."

Runaway leaders Celtic sit on 78 points after 32 games and assistant manager Johan Mjallby would like to surpass last season's total, when they finished one point behind Rangers.

"We achieved 92 points and we want to go at least one better so we can say there has been an improvement of the team because that is what you are striving for in management.

"Our main target is try to pick 15 points from the last six league games."

Mjallby believes there was unfair criticism of the side after losing the League Cup final to Killie and last week's Old Firm derby at Ibrox, given that Celtic were at one stage 15 points behind Rangers - albeit having played two games less - and having gone on an 26-game unbeaten domestic run.

"I think it has been a wee bit too much," added the Swede.

"We have been on a fantastic run. You have to remember where we were in October and obviously we have turned it around with a great run and now we are only one point from clinching the title."