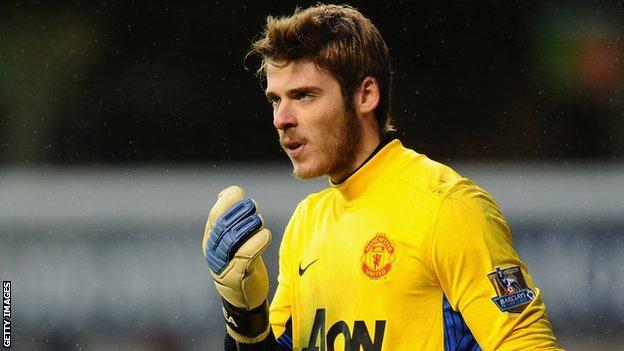 Sir Alex Ferguson says keeper David de Gea has shown "fantastic improvement" since his error against Blackburn in December contributed to a 3-2 defeat.

De Gea was subsequently left out for four games but, as Manchester United prepare to face Rovers at Ewood Park, Ferguson has seen a different player.

He said: "He didn't let it get to him and is playing with confidence.

"It took him time to adapt to the different ways of the English game and he is showing that now."

The United manager said that De Gea has shown similar strong-mindedness to Blackburn manager Steve Kean, who has overcome fans' protests to steer Blackburn out of the relegation zone.

"It's similar to what we were saying about Steve Kean," said Ferguson. "He got a grip of it and stood up as a man."

Blamed for Grant Hanley's winner in the first match against Blackburn this season, De Gea eventually returned against Chelsea, produced a magnificent save to repel an injury-time free-kick by Juan Mata, and has not looked back.

"The area where he's been criticised was the aerial ability in the box," added Ferguson. "He should have dealt with the last corner against Blackburn better. He knew that. He has addressed that section."

Despite securing the title at Ewood Park last season, United have won there just twice in 11 league visits.

"The game at Blackburn has always been a difficult match," said Ferguson. "It is a local derby and tends to be a bit feisty."

Rio Ferdinand is a slight doubt with a back problem, with former Rovers defender Phil Jones on standby if he fails to recover.

Blackburn's assistant manager Eric Black played under Ferguson at Aberdeen and he is looking to get the better of his fellow Scot in the dug-out.

"I've never been in a position to say, 'Well done' and we've taken the three points," said Black, who joined Steve Kean's backroom team at Rovers after Blackburn's win at Old Trafford on 31 December.

"But he's striving yet again to win the Premier League and I can guarantee he'll be as focused as he was the first time he walked into Old Trafford because that's what he does."