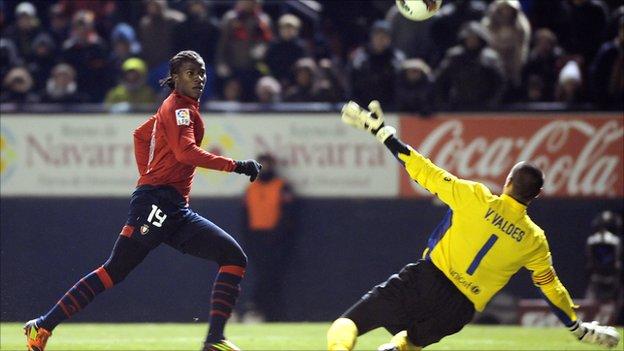 Senegal are finding it hard to secure the release of their players for their Olympic Games play-off against Oman.

The West Africans face the Asians on 23 April in Coventry, with the 16th and final place at the Olympics at stake.

Obtaining players is complicated by the game falling outside the international calendar.

"We are working hard to make clubs understand that this is a historic moment for our country," Senegal FA chief Augustin Senghor told BBC Sport.

One key man that the Senegalese are chasing is Osasuna's Ibrahima Balde, whose side are chasing a European spot in Spain's La Liga.

Despite having qualified for a World Cup in the past, reaching the quarter-finals on their only appearance in 2002, Senegal's footballers have never played at an Olympics.

Last week, the Senegalese learned that they would face Oman in the vital play-off, after the latter topped a three-team qualifying group in Vietnam.

"We began preparing for the play-off two months ago," said Senghor.

"We played a friendly against Mexico in early March and at the same time, our technical director (Amsatou Fall) was attending the qualifiers in Vietnam to monitor our opponents.

"At the same time, one of our Olympic coaches is in Europe making contact with the managers of the different teams where our best players play.

"But it is not an easy task because all the European championships are nearing their end - and it's complicated as some teams are playing for the national title while others are trying to avoid relegation."

Should Senegal reach the Olympic Games, they will find players easier to obtain for the competition with Fifa ruling on Friday that clubs must release players for the tournament.

Fourteen teams have already joined hosts Great Britain at the 2012 football tournament, which gets underway on 25 July.