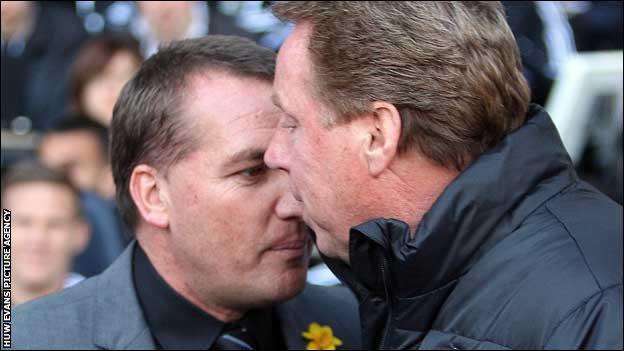 Rodgers is among the favourites to replace Harry Redknapp if the Tottenham Hotspur boss takes the England vacancy.

The 39-year-old revealed he has buy-out clause in the new three-and-a-half year deal he signed in February, which is reported to be in excess of £4m.

"A few managers will be moving about at the end of the season," said Jenkins.

"And quite naturally if we keep moving as we are and the style of football we play, there's no doubt Brendan's name will be mentioned with a few jobs.

"It is something we've got to get used to since we've been promoted to the Premier League because gradually our performances and results have improved so our manager and team get a lot more coverage.

"Obviously there is no way we want to lose Brendan, we want Brendan with us for the next few years as we continue to build our club.

"In any discussion of compensation or anything financial or legal, it is still a game based on what people want - whether it is a manager or a player.

"We are fully committed to making sure Brendan Rodgers stays with our football club and I'm sure when the time comes that he doesn't want to stay out football club, he will come and tell me."

Swansea had enjoyed an impressive run of results which has seen them beat Manchester City and Arsenal at home, as well as holding Chelsea to a draw.

The Northern Irishman has admitted there is a buy-out clause but chief Jenkins would not confirm the buy-out figure.

"I think any contract issues are private," he insisted.

Swansea earned £2m in compensation when Wigan Athletic temped Roberto Martinez to the Premier League in June 2009 and it could be double if Rodgers is wanted by a big club.

"We will do everything we can to keep managers," said Jenkins. "But there is obviously a level compensation - that is just common sense."